No More Valedictorian At This Ohio High School, Participation Trophies For Everyone! 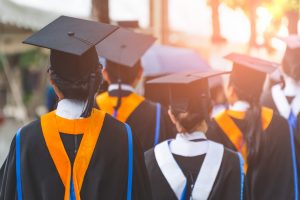 If there’s one thing this writer could fill pages about, it’s the aspects of America’s public schools that are in dire need of repair or renovation.

There is a lot to be done for the institution meant to form the next generation of Americans into critically-thinking, productive members of society. Removing one of the most harmless incentives and highest honors for achievement ever conceived in the history of academia ain’t one of them, though.

That’s the little experiment William Mason High School (MHS) in Mason, Ohio is going to conduct—abandoning the age-old tradition of naming a valedictorian and salutatorian for each year’s graduating class.

According to the latest data offered by Public School Review, MHS boasts very impressive graduation rates, literacy rates, and math proficiency rates. It seems, however, that MHS principal Bobby Dodd has never heard of not fixing something that ain’t broke.

“This will help reduce the overall competitive culture at MHS to allow students to focus on exploring learning opportunities that are of interest to them,” Dodd explained to local news outlet WLWT.

Now, don’t get me wrong, it’s a very forward-thinking and effective strategy to foster interest-led learning in our schools. It’s the approach many of us weird, unsocialized homeschoolers take, and with typically fantastic results.

But, can anyone tell me just why the interest-led approach is somehow incompatible with a system that also rewards exceptionalism? How does stripping the year’s top achiever and his or her runner-up of these titles make any impact whatsoever on their ability to excel in subjects they enjoy?

It doesn’t, but okay.

Dodd explained that a meeting with district teachers and parents led to the following conclusions about the “culture” at MHS:

“[W]e gathered feedback about the current culture at MHS and the impact it is having on students’ mental well-being. A large part of these discussions included the highly competitive culture and the impact student course loads have on stress and anxiety levels.

Again with the non-issues, Bobby! Exceptionalism is not the enemy, here. Why is seeking to up your GPA so evil?

Don’t get me wrong—we shouldn’t be placing such an extreme and skewed emphasis on performance at school that kids lose their minds. Personal high standards for achievement and the exceptionalism that has made MHS great to begin with, however, are not remotely the same as the high-stakes, numbers-centric approach that starts with kindergarteners taking standardized tests and ends with college kids jumping off of bridges over less-than-perfect GPAs.

In short, rewarding the students whose incredible diligence and hard work put them at the tippy-top of their class should not have a detrimental affect to the rest of the kids. The participation trophy mentality, however, isn’t quite so harmless.