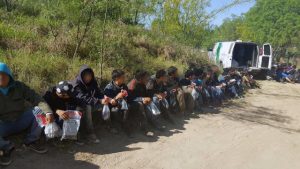 The Democrats are no doubt foaming at the mouth with pure rage today, as the parliamentarian in the Senate has handed down a ruling that says the provisions that provide almost 8 million illegal immigrants and non-citizens permanent resident status and opens up a path to citizenship can not be included in the Democrats’ “Build Back Better” budget reconciliation bill.

In the ruling, which was handed down on Sunday by Senate Parliamentarian Elizabeth MacDonough, who formerly served in the Department of Justice handling immigration cases, went on to state that “the policy changes of this proposal far outweigh the budgetary impact scored to it and it is not appropriate for inclusion in reconciliation.”

Democrats are utilizing the budget reconciliation process to try to push through a planned $3.5 trillion worth of social and environmental programs. The process allows them to bypass the need to gain support from at least 10 Senate Republicans due to filibuster rules.

But bills in that process are not allowed to concern measures “extraneous” to the budget.

“Changing the law to clear the way to [legal permanent resident] status is tremendous and enduring policy change that dwarfs its budgetary impact,” MacDonough went on to say in her ruling.

The decision is a major blow to Democrats. Senate Majority Leader Chuck Schumer pledged to hold additional meetings with the parliamentarian to discuss alternative proposals to address the issue.

“We are deeply disappointed in this decision but the fight to provide lawful status for immigrants in budget reconciliation continues,” Schumer came out and said in a statement.

Of course Schumer and his buddies are disappointed. Now they have to figure out another way to stuff the ranks of their voter rolls, and that’s a very time consuming task. How unfortunate, right?

I don’t think anyone is going to feel too bad for him.

This whole legislation is a disaster and is far, far too expensive. You cannot decrease the size of a debt by spending more money recklessly. And yet, that’s the strategy these folks keep trying.

Surely they are doing this on purpose. They have to be. No one can be that stupid, right?