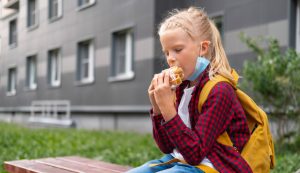 Parents of kids who are attending school in New York City recently complained to the New York Post that students have “eaten outdoors every day this week,” before adding, “”it’s cold,”and stating they haven’t been notified by the schools when kids will once again be allowed to eat inside.

“It’s getting a little ridiculous at this point,” one parent, a mother of a kid who attends school at MS 104 in Manhattan, went on to say. “They’ve eaten outdoors every day this week. It’s cold.”

According to the Department of Education, school principles are allowed to decide whether or not it’s safe for children to eat indoors due to COVID-19, and some schools in the city are holding lunch indoors, according to the Post.

“The problem is that there is no hard metric for when the kids can go inside,” one parent went on to tell the newspaper during their conversation. “It’s just up to the principal, whatever they decide goes. Hopefully we’re not out here in February.”

The mother of a child at an elementary school in Park Slope said that “We’ve heard no plans to bring them inside anytime soon. In fact, they are still asking for parents to give the school their Fresh Direct bags to create seating pads. It doesn’t sound like they’re going in.”

“It’s already hard enough for a little kid to eat outside while sitting on concrete with a mask on. What does the weather have to be to go inside? How low does it have to go?” A parent from Brooklyn said during a chat with the publication.

The Post reported that the department is insisting that kids do have the right to eat inside if they want, however, some parents stated they were unaware of this.

“Schools and students always have the option to have their meals inside, including if there’s inclement weather like rain, high or low temperatures, high winds, and more,” DOE spokesperson Katie O’Hanlon said to the Post, pointing out that the department will remind school administrators of this policy. “Thanks to our amazing food service workers, schools can quickly pivot to serve lunch in a variety of formats and in various locations if needed.”