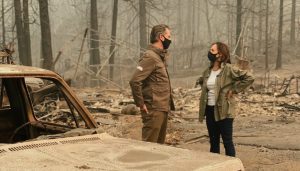 On Tuesday of this week, Democratic vice presidential candidate Sen. Kamala Harris, along with California Gov. Gavin Newsom decided to take advantage of a photo-op by taking a picture right in front of a home that was burned up in the recent bout of wildfires, all so they could use the picture to push their climate change agenda.

The property in question belongs to an Auberry, California family. The owner of the home’s grown children said they haven’t been allowed to visit the house since it’s been under an evacuation order. They added that Harris and Newsom did not have permission to be on their property when the photos were taken.

Spent time surveying a burn site with @GavinNewsom in an area that has been devastated by the recent wildfires in California. I’m incredibly grateful for the courage of our brave firefighters and those who have come near and far to help those fleeing the destruction. pic.twitter.com/EHSUPgkOsl

For the friends of mine that don’t recognize the fireplace in the background, that is what is left of my parents house! What has me really frustrated right now is the fact that these two politicians used my parents loss for a photo opportunity to push their political agenda! Political party wouldn’t have made a difference in this moment. Decent human beings that have character and class, wouldn’t air someone else’s misfortune on national television! Think about this when you go to the polls in a few weeks to vote. Look at this picture closely, imagine it is what is left of your hard work, hopes, dreams, place of sanctuary. Do you want this kind of leadership, using you and your loss for political gain?!

For the record, my parents haven’t even been let back in yet themselves, to sort through what is left of their lives, but these two felt the need to go traipsing around my parents property without permission. I guess those property taxes my parents pay allow politicians to do this! Private property doesn’t exist in California anymore!

Patten’s sister Bailee said, ”When we saw those photos, it was – there aren’t words, because it’s like, we haven’t even seen our house. We haven’t seen our property. There is no house, we haven’t even seen our property … This isn’t just devastation, this is our lives. This is where we grew up, these are our memories. And to not have that – to feel so helpless – and I guess that’s what we’ve all been thinking, is that we were so helpless. Because we weren’t there, we haven’t gotten to deal with our loss. Instead, we’re having to watch it play out on social media and news.”

Dear Governor Newsom you don’t know me but I’m one of your CA citizens. That truck you are standing by is my dads work truck. He has had that thing for as long as I can remember. That land with all the rubble your standing next too, that’s my house I grew up in. You never got my parents permission to go on our property, nor did you ask if we needed help. What you did do is take my families loss and parade it all over social media and news networks to push your agenda. That agenda can wait, right now you should be caring about the families of this state. Thankfully this community is #mountainstrong and we will thrive.

“We’re survivors. We’re gonna get through this, but the whole community has lost. And to just take a picture of one loss, it’s not enough,” Patten finished.

Folks, Harris and Newsom are political opportunists, so the fact they took advantage of this chance to snap a few pictures to make themselves look good for their social media followers isn’t surprising. All that matters is the agenda. They’ve made that much clear.