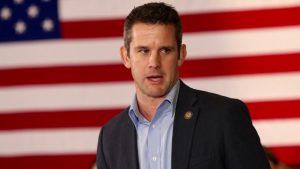 Rep. Adam Kinzinger, a Republican from the state of Illinois, who is infamous for being a very outspoken critic of former President Donald Trump and being one of only two GOP members who are on the panel investigating the Capitol riots, announced on Friday that he would be retiring from office.

The announcement was made in a video that was posted on Twitter.

According to Newsmax, “The military veteran, who won a long-shot suburban congressional district a decade ago, became one of a handful of Republicans who voted to impeach Trump on the charge of inciting the Jan. 6 insurrection at the Capitol.”

Kinzinger is now part of a very short list of Republican Trump critics in Congress who have decided their time in office is done.

We can’t say for sure, but it seems likely that a big reason for his retirement could be due to the fact that Kinzinger alienated himself from the Republican base with his heavy criticism of former President Trump.

Trump is still a very influential voice who has a significant following in this country. If a person in Congress wants to continue serving in such a capacity, they need to think hard about before pushing away the very people they need to be elected.