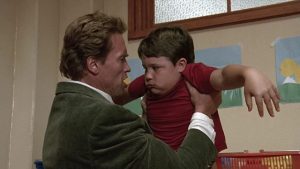 The whole dang world has gone completely nuts, and the vast majority of the wackiness is stemming from how easily offended folks are today and the efforts made by the PC Police to take anything and everything fun and ruin it by turning it into a political cause.

A good case in point is the recent anti-police sentiment running rampant in America in light of the death of George Floyd months ago. The latest victim of the madness is an outdoor screening of the classic Arnold Schwarzenegger film, “Kindergarten Cop.”

According to Portland author Lois Leveen, the comedy makes light of what she refers to as the “school-to-prison pipeline.” Never heard of that? Me either. That’s probably because such a thing is a made up leftist construct. But hey, I’m not an expert on the criminal justice system so maybe I’m wrong.

According to Willamette Week, Portland’s NW Film Center (NWFC) decided, after discussions with “staff and community members,” that screening “Kindergarten Cop” to open their “Cinema Unbound” drive-in summer movie series at Zidell Yards would be ill-advised, given the current political climate. The 1990 movie, which was filmed in Oregon and features Schwarzenegger as a cop who goes undercover at an elementary school, will be replaced with a screening of “Good Trouble,” a documentary about late Rep. John Lewis (D-GA).

NWFC’s decision came shortly after Lois Leveen complained on Twitter about the Schwarzenegger comedy. According to her website, Leveen’s work “has appeared in the New York Times, the LA Review of Books, the Chicago Tribune, the Huffington Post, the Wall Street Journal, the Atlantic and on NPR.”

Check out some of the insane ramblings of Leveen and judge for yourself whether or not this individual is playing with a full deck:

What’s so funny about School-to-Prison pipeline? Kindergarten Cop-Out: Tell [NWFC] there’s nothing fun in cops traumatizing kids. National reckoning on overpolicing is a weird time to revive Kindergarten Cop. IRL, we are trying to end the school-to-prison pipeline. There’s nothing entertaining about the presence of police in schools, which feeds the ‘school-to-prison’ pipeline in which African American, Latinx and other kids of color are criminalized rather than educated. 5- and 6-year-olds are handcuffed and hauled off to jail routinely in this country. And this criminalizing of children increases dramatically when cops are assigned to work in schools.

“It’s true Kindergarten Cop is only a movie. So are Birth of a Nation and Gone With the Wind, but we recognize films like those are not ‘good family fun,’” Leveen added. “They are relics of how pop culture feeds racist assumptions. Because despite what the movie shows, in reality, schools don’t transform cops. Cops transform schools, and in an extremely detrimental way.”

Are we living in the Twilight Zone? Surely this is all just a badly written episode of television, because it just cannot be real life. I refuse to believe this is the world we live in right now. It just cannot be.

Unfortunately, as much as I’d like to pretend that’s the case, we are in fact living in reality. People are so sensitive today that you can’t make a good comedy film. Unless it makes fun of conservatives and Christians. Then it’s celebrated as pure, classic cinema.

Who else wants off the ride?