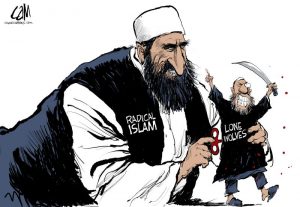 Sayfullo Saipov’s  cry, “Allah Akbar,” had barely ceased its echo down the blood-stained bike path of lower Manhattan before the news pundits and sociologist begin to emphasize that our most urgent task as a country is to figure out how to defeat Islamophobia.

As Islam scholar and author Dr. Robert Spencer noted: “Every time there’s a jihad terror attack and every time there’s an uncovered plot for jihad terror attack, the news media is filled with stories about anti-Muslim backlash. (The) local mosque asks for police protection. The imam says we’re afraid of right-wing yahoos who are going to come and victimize innocent people.”

“And every suspicious sneeze and sideways glance at oversensitive Muslims is definitively interpreted by the grievance-mongers of the Council on American-Islamic Relations and their ilk as a “hate crime.”

“O worshippers of the cross in USA,” the poster states. “Our lone wolves will come to you from where you do not know and we will terrorize you wherever you are and we will show you multitudes of terror and pain that you showed to the Muslims, and what is coming is more bitter and greater.”

We, in the Western world, are far too naive regarding the intentions of Islam and too ignorant of its history. The very “root” of Islam is in military conquest, and the “fruit” we observe today springs forth from this root.

In the aftermath of the September 11, 2001 attacks, President George W. Bush characterized Islam as a “religion of peace.” Many people agree with that belief, saying the vast majority of Muslims live peaceful lives. The president gave a politically correct statement, but the truth is totally to the contrary.

Islam in Arabic means submission, surrender or subjugation. A Muslim is one who submits. The Arabic word for peace is salaam. Islam is the active form of salaam. Muslims see themselves as a “peace making force” using argument, intrigue, commerce, threats, terrorism, warfare and every other means possible to secure Islam as the only religion worldwide.

It is not just so-called “radicalized Muslims,” but all true devotees of Islam that are not permitted to make peace with a non-Muslim country until its inhabitants surrender to Islam. They can agree to a cease fire for a period of time – but never to peace with non Muslims.

In the Western world, our understanding of “peace” differs to a great extent from that of the Middle Easterner. To the Middle Easterner, “peace” connotes the idea of “having your foot on your enemy’s neck” i.e.; “surrender” or “submission.” To the Muslim, peace can only come when there is a surrender and submission to Allah. I dare say, this is a far cry from what most Westerners mean by “peace.”

The relentless and often vicious persecution by Muslims against Christians is seldom recognized or understood. Many assume that the concept of Jihad, or holy war, espoused by Muslim leaders like the late Iranian Shia Muslim religious leader, revolutionary, and politician, Aytollah Khomeini, are aberrations not truly representative of Islam. They call those who engage in such reprehensible acts “radical Muslim fundamentalists,” but in reality these are the true and dedicated Muslims.

The following were the often repeated public pronouncements of the Ayatollah Khomeini after the revolution in Iran in 1979: “We shall export our revolution, to the whole world. Until the cry ‘Allah Akbar’ (God is great) resounds over the whole world. There will be struggle. There will be Jihad … Islam is the religion of militant individuals … Islam will be victorious in all the countries of the world, and Islam and the teachings of the Quran will prevail all over the world … This is the duty that all Muslims must fulfill ….”

What few Westerners understand, however, is that those Muslim leaders who call for the overthrow of all governments and the establishment of an Islamic super-state controlling all aspects of life for every person on earth are not extremists on the fringe of Islam. Actually, Jihad, the subjugation and forcible conversion of all people to Islam and world domination are central tenants of Islam. Jihad is ranked by many Muslims as the sixth pillar of Islam.

Jihad was so important to the founder of Islam, Muhammad, that he declared it to be the second most important deed in Islam.

Muslims, in fact, divide the world into two sectors: Dar-al-Islam (the House of Islam) and Dar-al-Harb (The House of War). The only countries considered to be at peace are those where Islamic law (the Sharia) is enforced.

“… the message of “Allahu Akbar” is unmistakable: Kill all infidels.

“But to those who pretend that “Islamophobia” and the imagined “backlash” against Muslims are greater threats than the hijackers and head-choppers, “Allahu Akbar” is Arabic for “The death and destruction committed in the name of Islam have nothing to do with Islam.”

“When homicidal warriors for Allah are maiming and murdering non-Muslims according to the plain directives of the Quran  — and spelling out their celebration of Islam-inspired violence word (ALLAHU) for word (AKBAR) —  it is crazy and delusional to say their actions cannot be understood.

“Stop the whitewash. Stop the insanity. Jihad denial is suicidal.”

There are NO LONE WOLVES in ISALM!