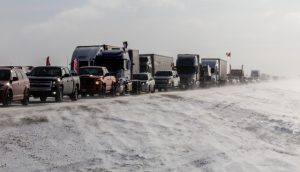 According to Maureen Steele, the national organizer of the “People’s Convoy,” which is the U.S. counterpart to the Canadian “Freedom Convoy” made up of truckers who are protesting against COVID vaccine mandates and other restrictions, will be ready to hit the road on Wednesday.

The convoy will start out with 1,000 trucks at the start of the trip with other joining in along the trek across the country.

“We’re going to be starting the convoy out of Barstow, California,” Steele stated during a conversation with Newsmax’s Eric Bolling on “Eric Bolling The Balance,” going on to add that the specific location in Barstow will be announced as time draws nearer to the event because the concern for operational security is “paramount.”

“The Canadian convoy was pretty organic when it happened,” Steele remarked. “Ours, they had a month’s notice, so our concern is disruptive groups coming in. We’re trying to just prepare for counter-protests and to take safety precautions for that.”

The organizers of this protest have also set up website where truckers who are interested in joining up with the convoy can register, which will include providing their license plates, “so we know exactly who is in the convoy and to make sure that it’s going to be a safe ride,” explained Steele.

The organizers, on the website, said the organization is demanding that the “declaration of a national emergency concerning the COVID-19 pandemic be lifted immediately and our cherished Constitution reign supreme.”

Donations are also being accepted through a website link, rather than through Go Fund Me or other crowdfunding sources.

Steele added that the organizers will be releasing the towns where the convoy will stop at about 24 hours before they arrive, for precautionary purposes.

She confirmed stops in Arizona and Texas, but said other stop locations will be announced as the convoy moves through the country. Bolling said he plans to join the convoy before it reaches Washington, D.C., “if that’s the final location. Again, you’re holding that back for now.”

“Steele said the effort anticipates that about 1,000 trucks will leave California, and plans to have a few trucks ahead of the convoy ‘just to check in with law enforcement in towns ahead of the convoy, that if we’re going to be marshaling there that evening, to make sure they’re prepared for a massive convoy to roll into town,” Newsmax stated in their report concerning the interview.

Truck owners and operators Alan and Bonnie Kelly, also had a conversation with Newsmax on Wednesday and stated they will be in Barstow on February 23, at the start of the convoy, and revealed the effort is currently receiving a lot of support for the trip.

“I haven’t talked to anybody yet who doesn’t support what we’re doing,” Mr. Kelly said during a chat with Bolling. “I’ve talked to our pastor. He plans on attending…everybody is supportive, and everybody plans to participate, so I think it’s going to be very huge because it’s not just the truckers. It’s we, the people, and its people from every facet and every industry in the country that are better participating, so it’s got potential to be probably the biggest that its ever been.”

The Facebook group page for the group has already garnered 100,000 followers.

“Our brothers and sisters of the highway succeeded in opening Canadians’ eyes about the unconstitutional mandates and hardships forced onto their people,” the organizers of the event stated in a post on the page. “Now it’s time for the citizens of the United States of America to unite and demand restoration of our constitutional rights.”

This is how you fight for your freedom, folks. The message is spreading around the world and it is resonating.