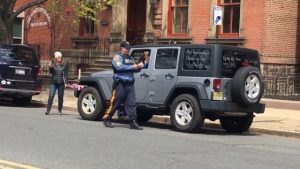 Things are getting tense here in America, as folks have already grown tired of the oppressive stay-at-home orders that were originally intended to help stop the spread of COVID-19, but have also done a lot of damage to our fragile economy, forcing many businesses to close their doors permanently and others to lay off employees.

As a result of this, protests have started to break out across the country, and given the First Amendment right to assemble together to air grievances, this is perfectly acceptable. And yet, many state governors are violating these rights by attempting to shut down protests and taking legal action against those who dare stand up for their right to let their voice be heard.

In fact, a woman who organized a protest in New Jersey has just been charged by state Gov. Phil Murphy for violating the stay-at-home order.

Kim Pagan was charged Friday after organizing a protest outside of Trenton’s Statehouse demanding New Jersey reopen its economy so workers can get back to their jobs. Pagan was not arrested but instead was issued a summons. Violations of emergency orders carry a sentence of up to six months in prison and a $1,000 fine.

“It was a peaceful protest, and the streets were not gridlocked as seen during other protests in other states. However, officers still wrote summonses to those in their cars. There was at least one arrest. This infringement on the First Amendment will not stand. We offer our support to those fighting this,” Central Jersey Libertarians posted on its Facebook page.

Murphy issued the stay-at-home order for New Jersey in March. The orders include wearing a mask while out grocery shopping, picking up food takeout items, or using public transportation. The order also prohibits all social gatherings.

Murphy went on to say, “I respect your right to protest but trust us on this, we’re basing this on the facts, please stay home.”

There aren’t any stipulations attached to the amendment that protects this right. Nor are rights granted by the government. Thus, they have no power or authority to take them away. The duty of the government is to protect the rights of the people, not curtail them.