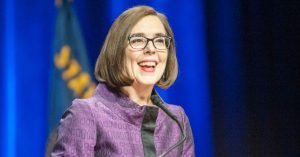 Governor Kate Brown, the state’s Dem leader, is exercising a controversial right under the state’s constitution to order state troopers to literally go and round up Republican state senators.

According to a report by The Oregonian, all 11 of Oregon’s Republican state senators are “in hiding” to avoid giving the Oregon Senate the necessary quorum to vote on a near-Orwellian carbon-reduction bill.

For their part, the GOP senators have minced no words about their plan to force the legislature’s hand.

“In a few moments, I will not be in Oregon,” Sen. Cliff Bentz told the Oregonian.

The bill sailed through the state’s House of Representatives, but even 10 hours worth of negotiations on the language between Senate Republicans and Democrats didn’t lead to a consensus.

So, the Republicans peaced out.

“I do not believe the state police will be able to find any of our members,” Sen. Tim Knopp, a Republican from Bend, Oregon, told NPR. “So, instead of the Democrats putting efforts into finding bipartisan solutions, their answer is to waste state police resources to try and track down legislators and arrest them. It sounds more like a dictatorship than a democracy.”

“It is absolutely unacceptable that the Senate Republicans would turn their back on their constituents who they are honor-bound to represent here in this building,” Brown said. “They need to return and do the jobs they were elected to do.”

Although the state constitution allows the majority party to “compel” the attendance of absentee legislators, it is a rarely used remedy and Gov. Brown has yet to offer any opinion as to whether it was “unacceptable” when the Democrats did the exact same thing in 2001 to avoid a vote on a redistricting bill.

Oregon Senate Republican Leader Herman Baertschiger Jr. said that Brown and the Democrats were creating a one-party “dictatorship,” according to the Miami Herald.

“All we want is for the people of Oregon to vote on this horrible bill,” Baertschiger said, “Walking out is part of the conversation because the Governor is not willing to move on her position on the bill, and she is only representing Portland and the environmental community, not rural Oregonians.”