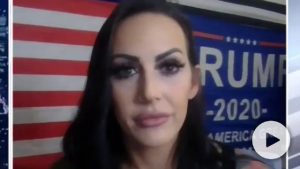 Oregon salon owner Lindsey Graham says that Gov. Kate Brown has tried to “retaliate” against her family in a $100,000 lawsuit, for defying the state’s lockdown orders and opening up her business.

Most of these orders have caused folks to lose substantial amounts of income, leading to financial hardship. We’ve seen numerous businesses close up for good, which leads to permanent job loss for many individuals. But, of course, none of this matters.

All that matters is stopping the spread of COVID-19.

Glamour Salon owner Lindsey Graham reopened her salon in May and received a fine of $14,000 from the state. Graham claimed that Brown began to personally “terrorize” her family, and threatened to place her children under the care of Child Protective Services to “intimidate” her into closing her salon doors.

“As soon as I tried to open my doors against the governor’s mandate back in May, she came at me with the full weight of the state,” Graham told “The Ingraham Angle” on Monday.

Three days after publically opening her salon, Child Protective Services showed up at Graham’s home and “interviewed my children without my presence,” she explained.

Graham said they “opened a full-blown case against me which wwas completely bogus and unwarranted, and it didn’t come until I shot back at them with a threat of the lawsuit,” that they finally backed down.

This is the other side of the coronavirus pandemic that no one is talking about. Power hungry politicians usurping authority from the people is happening all across the country, but the news media doesn’t want to cover any of that.

Mostly due to the fact they are partnered with the Democratic Party as their propaganda wing.

We need to start showing that we care for average American citizens by opening up the economy so these folks can work and provide for their families, instead of destroying their livelihoods.