Oregon Governor Finally Takes Action To End Violence In Portland, Cops Want No Part Of It 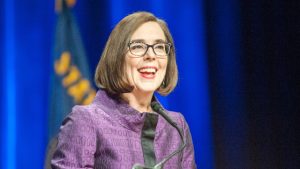 Oregon Democratic Gov. Kate Brown has finally, after three whole months of chaos and destruction, decided to do something about all of the violence, rioting, and looting that has been ripping the city of Portland apart.

The only problem is, thanks to the lack of support local law enforcement has been receiving from both state and local government, these individuals want nothing to do with it.

Guess Portland made their bed and now have to lie in it.

Brown said that her “plan” was to “protect free speech and end violence in Portland” after a right-wing protester was shot to death over the weekend following a political protest. Law enforcement is reportedly investigating an Antifa and Black Lives Matter supporter in connection with the killing.

“Brown said she will be asking sheriff’s deputies from both Clackamas and Washington county, as well as officers from Gresham, to support Portland Police in keeping the peace,” KATU News reported. “The governor is convening a community forum on racial justice and police reform, which will include Black protest organizers and community leaders, as well as Portland Mayor Ted Wheeler.”

Clackamas Sheriff Craig Roberts blasted Brown over her plan claiming that his department would participate, saying that “it’s about changing policy not adding resources.”

KATU News reporter Kellee Azar tweeted out that the sheriff told her they will not be sending any deputies to Portland in support of Gov. Brown’s plan.

Strong statement from @ClackCoSheriff Roberts who says they will not send deputies to Portland after @OregonGovBrown released a plan saying they would.

Instead, he says "the criminal justice system will need to do its part and hold offenders accountable."#LiveOnK2 pic.twitter.com/DETlaPzTCN

Roberts isn’t the only one giving Brown’s plan a hard pass. Sheriff Pat Garrett has declined to be involved as well.

The Oregon Association of Chiefs of Police also shredded the decisions that have been made by the Democratic leadership in Oregon and Portland, stating that their plan of “abandoning Law Enforcement or the need for policing is not working.”

“Over the weekend, members of our associations were approached to assist with policing in the City of Portland,” the OACP said. “Unfortunately, due to the lack of support for public safety operations, the associated liability to agencies who would be assisting in Portland and the lack of accountability for those arrested committing criminal acts, we cannot dedicate our limited resources away from the communities we serve.”

Can anyone blame cops for not wanting to go to Portland to bail out these miscreant Democrat leaders?

For months they have slammed police officers. They’ve called them racists. They’ve fought to defund departments. On top of this, the radical leftist leadership of Oregon and Portland has tied the hands of law enforcement officers and told them not to get involved. Now, when their backs are against the wall, they want help.

You reap what you sow, folks.