Oregon Democrats Want To Hand Out $123,000 In Reparations To Black Residents 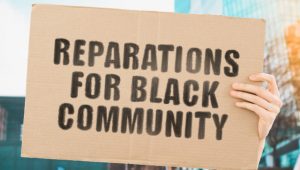 Oregon Democrats have recently introduced a bill that, if passed into law, will provide $123,000 in reparations to black residents over the course of their lives.

A copy of the state Senate bill says that the government will pay out the six figures to any person who can demonstrate that they are the descendant of an American slave and have “identified as African-American” on legal documents.

The text of the bill directs the state Department of Revenue to establish a reparations payment program to black Oregonians “who can demonstrate heritage in slavery” and provide documentation that they identify as “African-American” for at least 10 years. Recipients must reside in the state for at least two years before the application deadline of Dec. 31, 2022.

The payment would be an annuity where recipients would receive $123,000 paid out over the course of their life, plus interest.

The average black man has a lifespan of 75 years, so if a 30-year-old black man applies for the reparations program he would receive a yearly payment of approximately $2,733 per year from the Oregonian government. If the recipient receives a five percent interest rate on the reparations money, they could receive up to $2,870 per year.

Republicans have estimated that the state could end up spending $11.8 trillion on these reparations, which means a sizable increase in taxes is likely to be put on residents.

In other words, the radical left in Oregon wants innocent taxpayers that are white and from other ethnicities to foot the bill for these reparations, despite none of those people alive today owned slaves or have participated in slavery.

Holding the children accountable for the sins of the father is a horrific way to think. It’s unfair and unjust.