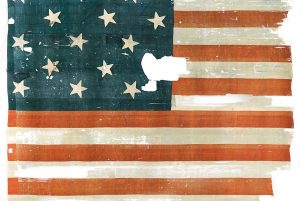 Though he didn’t know it at the time, the War of 1812 was nearing its end when President James Madison dispatched Francis Scott Key (Frank, to his friends and family) along with John Stuart Skinner, both lawyers, to negotiate the release of Dr. William Beanes. A preeminent American surgeon, Dr. Beanes had been captured by British forces two weeks earlier during the Battle of Bladensburg. The British victory there allowed them to advance on Washington, DC and burn many government buildings, including the White House.

On September 7, Key and Skinner boarded the HMS Tonnant in Baltimore harbor and accomplished their mission over dinner with representatives of the Crown. Their success, however, came with one caveat –the Americans were returned to their ship, but wouldn’t allowed to return to shore until after the British attacked Baltimore. The assault began on September 13 with a fierce naval barrage against Fort McHenry that lasted twenty-five hours.

When he went to bed that night, Key had little hope that the fort could withstand such a pounding. When he looked ashore from the harbor the next morning, however, Old Glory still flew; American forces had prevailed. Though he had vigorously opposed the war, the arrogance of the British and the courage of his fellow Americans led Mr. Key, and amateur poet, to pen the first verse of the song that would become our national anthem.

Many historians claim that Mr. Key intended to write a poem, which was later put to music. However, he specified that the verses should be sung to, ironically enough, an English drinking song called “To Anacreon in Heaven”. Originally titled “The Defence of Fort McHenry”, a Baltimore music store sold the first copies of the song’s sheet music as “The Star-Spangled Banner”. That name stuck, and the piece became standard patriotic fare along with “Yankee Doodle”.

The song’s popularity grew over the next several decades and in 1916, President Woodrow Wilson issued an executive order making “The Star-Spangled Banner” the “national anthem of the United States” – for all military ceremonies. Finally, in 1931, President Herbert Hoover signed a bill into law making Francis Scott Key’s words the country’s official national anthem.

Mr. Key penned four verses to the song. A fifth was added some sixty years later by Oliver Wendel Holmes to support the Union cause in the Civil War. The original words are below. 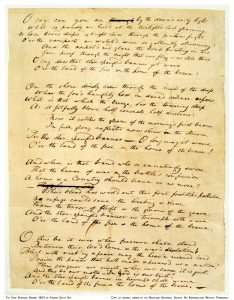 O! say can you see by the dawn’s early light
What so proudly we hailed at the twilight’s last gleaming?
Whose broad stripes and bright stars through the perilous fight,
O’er the ramparts we watched were so gallantly streaming?
And the rockets’ red glare, the bombs bursting in air,
Gave proof through the night that our flag was still there.
O! say does that star-spangled banner yet wave
O’er the land of the free and the home of the brave?

On the shore, dimly seen through the mists of the deep,
Where the foe’s haughty host in dread silence reposes,
What is that which the breeze, o’er the towering steep,
As it fitfully blows, half conceals, half discloses?
Now it catches the gleam of the morning’s first beam,
In full glory reflected now shines in the stream:
’Tis the star-spangled banner! Oh long may it wave
O’er the land of the free and the home of the brave.

And where is that band who so vauntingly swore
That the havoc of war and the battle’s confusion,
A home and a country should leave us no more!
Their blood has washed out their foul footsteps’ pollution.
No refuge could save the hireling and slave
From the terror of flight, or the gloom of the grave:
And the star-spangled banner in triumph doth wave
O’er the land of the free and the home of the brave.

O! thus be it ever, when freemen shall stand
Between their loved home and the war’s desolation!
Blest with victory and peace, may the heav’n rescued land
Praise the Power that hath made and preserved us a nation.
Then conquer we must, when our cause it is just,
And this be our motto: ’In God is our trust.’
And the star-spangled banner in triumph shall wave
O’er the land of the free and the home of the brave!

Many historians enjoy pointing out the fact that the flag Mr. Key “…proudly hailed at the twilight’s last gleaming” was not the same banner he saw “…by the dawn’s early light.” Factually, they are correct. Major George Armistead, the commander of Fort McHenry, intended to fly a flag “…so large that the British [would] have no difficulty seeing it from a distance” when the attack came.

Mrs. Mary Pickersgill, a Baltimore flag maker, made his wish a reality. She made two wool flags for the major. One was a storm flag that measured seventeen feet by twenty-five feet. The other proved to be the largest garrison flag ever flown, measuring thirty feet by forty-two feet.

The garrison flag required eleven men to raise or lower it. If left in the rain, it’s estimated that its weight would have exceeded 500 pounds, considerably more than the flag-pole could bear. On September 13, 1814, the weather cooperated with neither attacker nor defender, dumping rain on the area throughout the night and into early morning hours.

Therefore, the smaller storm flag was raised during the battle. The next morning, the larger flag was raised again to celebrate the American’s victory over the superior British fleet. That would have been the flag Mr. Key saw in the dawn.

None of the song’s words, however, mention the size of the American flag, despite whatever arguments historians delight in. Francis Scott Key’s soul sang out when, against all odds, he saw his country’s flag waving in the early-morning light. We sing the words of his heart at all national functions, significant ceremonies and happenings, and at sporting events.

Today, some say our national anthem is racist. As proof, they cite a couple of lines from the anthem’s third verse. They read, “No refuge could save the hireling and slave
From the terror of flight, or the gloom of the grave:”

“See!” the simple-minded shout. “The whole thing is an ode to slavery!” For those whose emotions forever trump reason, this foolishness probably sounds plausible. However, a quick look at the reasons the U.S. declared war on Great Britain in 1812 shows just how deep the idiocy runs in our nation.

Economics, of course, was one of the main causes. Both the British and the French had imposed sanctions against the U.S. as part of the Napoleonic Wars. Once war was declared, the English boasted that they would quickly deprive the Americans of both their homes and their country. In order to facilitate their claims, they hired Hessian mercenaries and Native Americans to fight for them – otherwise known as “hirelings”.

Another major cause America had for entering the war was called impressment. The British Navy made a habit of capturing U.S. merchant ships and pressing their crews into service. If those men attempted to escape, they were either shot or hung. They were, therefore, slaves.

It’s true that neither the Declaration of Independence nor the Constitution protected African slaves when they were written. Over the last two hundred fifty years, however, our nation has evolved, making all Americans citizens who are protected by our laws. The principles of freedom and liberty belong to each of us – whoever our ancestors might have been – for as long as that star-spangled banner yet waves.

Those early Americans fought an enemy superior in training, materials, and numbers in order to protect the land of the free and the home of the brave. We face a more subtle threat today – ignorance. It is, however, just as malicious and dangerous as any army that ever took to the field.

If we hope to remain a free and self-governing people, we must follow in the footsteps of our ancestors and stand against this enemy, whatever the cost. Too many have paid too dearly to let the dawn break over another flag flying over American soil.