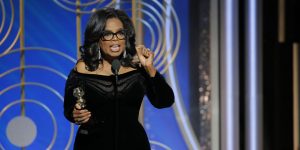 Oprah got a standing ovation from the Hollywood crowd at the January 6, 2018 Golden Globe awards when she said: For too long, women have not been heard or believed if they dared to speak their truth to the power of those men, but their time is up. … Their time is up.  So I want all the girls watching here and now to know that a new day is on the horizon!  And when that new day finally dawns, it will be because of a lot of magnificent women, many of whom are right here in this room tonight, and some pretty phenomenal men fighting hard to make sure that they become the leaders who take us to the time when nobody ever has to say, “Me too.”

Oprah’s speech at the Golden Globes used the word “truth” five times. She praised the press, observing that “it’s the insatiable dedication to uncovering the absolute truth that keeps us from turning a blind eye to corruption and to injustice.” Next, smoothly transitioning to the #MeToo moments of recent months, she declared that “speaking your truth is the most powerful tool we all have. And I’m especially proud and inspired by all the women who have felt strong enough and empowered enough to speak up and share their personal stories.”

Byron Tau of The Wall Street Journal tweeted, “Oprah employed a phrase that I’ve noticed a lot of other celebrity using these days: ‘your truth’ instead of ‘the truth.’ Why that phrasing?”

The Daily Wire’s Ben Shapiro immediately pointed out the problem in her comment: “There is no such thing as ‘your truth.’ There is the truth and your opinion.”

Grayson Gilbert expands on Shapiro’s assertion: “Truth by nature of its intrinsic quality is true, regardless of one’s hypocrisy, situation, or experience. Truth is not fluid, but rather stative (fixed) and unchanging. It is not your truth or my truth; it is the truth. The sad thing about all of this is that by seeking to limit truth to one’s experience, it becomes a never-ending game of manipulation. It never moves from the emotional to the logical, meaning it camps objectivity on the basis of feelings rather than facts. We might better understand a person’s story through their experience, but one’s story is not the litmus test for truth, how the world operates, nor the beliefs of people within that world.

“Secondly, it denies any chance that truth is a transcendent principle, being handed down to mankind through the very revelation of the Scriptures. Ultimately, I am not in the least bit surprised by this – yet it needs to be said nonetheless simply because Oprah (and many in this nation) claim a sort of spirituality. What this simply reveals is that their notion of what makes one a spiritual being is rooted in a denial of the things that are spiritual.”

Oprah Winfrey is an evangelist and false teacher of postmodern religion, “an a la carte spirituality where people pick and choose their beliefs from a smorgasbord line of offerings. She started out with a strong foundation in the Baptist church, but over time she drifted into unbiblical New Age beliefs. She mentions God a lot, but she defines Him in her own way. She has become a Christian-flavored pantheist, one who believes that an impersonal god, (“however you choose to describe him”) is a universal force or energy. She embraces karmic destiny from Zen Buddhism”(quote from Sue Bohlin, Probe Ministries).

And she enthusiastically proclaims religious pluralism: “One of the biggest mistakes humans make is to believe that there is only one way. Actually, there are many diverse paths leading to what you call God.”

In 2008, she and her spiritual gurus and mentor, author Eckhart Tolle presented a 10-part series, ‘Oprah & Eckhart Tolle: A New Earth.’ In this series Oprah and Eckhart take viewers on a chapter-by-chapter journey through Eckhart’s book, ‘A New Earth: Awakening to Your Life’s Purpose,’ and have thought-provoking discussions. This book is Eastern mysticism, which is incompatible with biblical Christianity, but many Christians can’t tell the difference.

On page 71 of his book, Tolle, states: “The Truth is inseparable from who you are. Yes, you are the Truth. If you look for it elsewhere, you will be deceived every time. The very Being that you are is Truth. Jesus tried to convey that when he said, ‘I am the way and the truth and the life.’ These words uttered by Jesus are one of the most powerful and direct pointers to the Truth, if understood correctly. If misinterpreted, however, they become a great obstacle. Jesus speaks of the innermost I Am, the essence identity of every man and woman, every life-form, in fact.”

Subtly, sadly and unknowingly, Oprah Winfrey has been converted to New Age spirituality and feels the call to be America’s foremost “preacher” of what she sincerely believes is good, liberating news that enables you to embrace and be your own god and live your truth anyway you wish as long as it doesn’t hurt anyone else.

On reconciling Eckhart Tolle’s book A New Earth with her Christian background, Oprah gives this testimony: “I’ve reconciled it because I was able to open my mind about the absolute indescribable hugeness of that which we call “God.” I took God out of the box because I grew up in the Baptist church and there were, you know, rules and, you know, belief systems indoctrined. And I happened to be sitting in church in my late 20’s…And this great minister was preaching about how great God was and how omniscient and omnipresent, and God is everything. And then he said, and the lord thy god is a jealous god. And I was, you know, caught up in the rapture of that moment until he said “jealous.” And something struck me. I was thinking God is all, God is omnipresent, God is—and God’s also jealous? God is jealous of me? And something about that didn’t feel right in my spirit because I believe that god is love and that god is in all things. And so that’s when the search for something more than doctrine started to stir within me.

“And I love this quote that Eckhart has, this is one of my favorite quotes in chapter one where he says, “Man made god in his own image, the eternal, the infinite, and unnamable was reduced to a mental idol that you had to believe in and worship as my god or our god.”

In spite of Oprah’s sincerity and worldwide popularity, there are only two categories we deal with: the truth or the lie.

Truth is not relative and subject to your experience or personal opinion, but rather, is bound within the nature and being of the triune God of Scripture, who reveals it to us through the person of His Son, Jesus Christ. It is the truth which shall set the captive free.