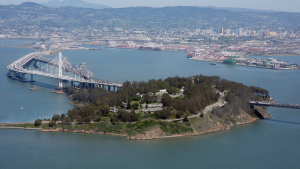 Is this not the perfect picture of virtue-signaling left-wing hypocrisy?

The City of Oakland, California, recently joined a lawsuit with the City of San Francisco to sue major oil companies for their role in “climate change” and theoretically rising sea levels that could, you know, make the San Francisco Bay rise.

Unfortunately, they clearly weren’t counting on also being fined by the Environmental Protection Agency for polluting the very same bay.

Last year, the Los Angeles Times reported that “San Francisco and Oakland are suing to get five oil companies, including San Ramon-based Chevron, to pay for the cost of protecting the Bay Area from rising sea levels and other effects of global warming,” adding that “… the cities could try to put oil companies on the hook for billions.”

“The law is clear that the defendants are responsible for the consequences of their reckless and disastrous actions,” Oakland City Atty. Barbara J. Parker pontificated at the time.

As Heartland.org reports, in late April, the EPA fined Oakland and the East Bay Municipal Utility District (EBMUD) $360,000 for permitting untreated sewage to flow into the San Francisco Bay. Oakland has been hit with fines before for sewage discharges; in 2014, EBMUD and the seven communities it serves, including Oakland and Berkeley, paid $1.5 million in civil penalties and were required to repair 1,500 miles of pipes over a 21-year period.

But over nearly a three-year period ending June 30, 2017, Oakland, EBMUD and the Stege Sanitary District — which is part of the larger public utility and serves El Cerrito, Kensington and part of Richmond — were found to have violated rules that bar sanitary sewer overflows from reaching waters, according to the Environmental Protection Agency and the San Francisco Bay Regional Water Quality Control Board.

What was that about protecting the Bay again?

Looks like it’s far easier for these far-left city governments to sue major oil companies to foot the bill for municipal development than it is to actually be environmentally-friendly themselves.

This is the foundation of the green agenda, by the way. It’s based more on guilt-tripping and implementing fines and arbitrary regulation than it is about passing constructive legislature that might actually help us all, right or left, be good stewards of the land we have been given.

Control and money: the two things the left cares about most of all. Moral consistency not required.