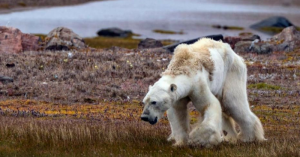 The left seems pretty convinced they’ve convinced everyone that their evidence for climate change is very convincing.

They do this by speaking about it as if it is fact and writing everyone who brings up the lack of substantial data for anthropogenic climate change as an inbred uneducated hillbilly.

Come to think of it, they tend to write everyone who disagrees with them off as an inbred uneducated hillbilly…that or a white supremacist.

So when National Geographic shared a picture a few years back of an emaciated and ailing polar bear, a supposed victim of a planet addicted to fossil fuels and plastic straws and Jesus, they took for granted that their audience would accept at face value the creature they dubbed “the face of climate change.”

There was only one problem, the photographer has now revealed…that polar bear was most likely just sick or old, and not “the face of climate change.

“We had lost control of the narrative,” she said.

“Photographer Paul Nicklen and I are on a mission to capture images that communicate the urgency of climate change. Documenting its effects on wildlife hasn’t been easy,” she wrote in the article. “With this image, we thought we had found a way to help people imagine what the future of climate change might look like. We were, perhaps, naive. The picture went viral — and people took it literally.”

She estimated that 2.5 billion people saw the footage: “It became the most viewed video on National Geographic’s website — ever,” she said.

From there, social media and news outlets erupted over the message that was being portrayed.

Some experts suggested a number of reason besides climate change that could’ve led to the animal’s condition, including age, illness or even injury.

Mittermeier admits that she couldn’t “say that this bear was starving because of climate change.”

“Perhaps we made a mistake in not telling the full story — that we were looking for a picture that foretold the future and that we didn’t know what had happened to this particular polar bear.”

Gee, I wonder why people took it literally. It’s almost as if it was deliberately framed in that light.

Don’t be fooled, these are professional, high-caliber content creators and editors. This isn’t a mistake of the audience, as the photographer herself admits, it was clearly the fault of the editors.

But that’s not stopping her from looking for the next “face of climate change”:

The photographer says that her image became another example of “environmentalist exaggeration,” but added that her intentions were “clear” and that if she had the opportunity to share “a scene like this one” again, she would.

So…if she had the opportunity to deceive billions again with a false impression of the effects of climate change, she would.

Glad to know she’s so trustworthy!