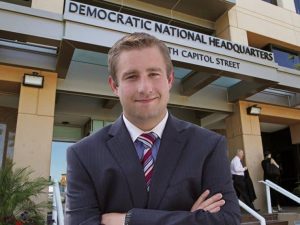 Remember Seth Rich? Those on the left certainly hope you don’t. Seth Rich was the Democratic National Committee staffer that was found shot in his Washington, DC neighborhood one year ago today.  Initial reports said that the shooting was the result of a robbery that happened at 4:19am, yet his wallet, watch, and other personal belongings were not taken. Rich was shot twice in the back and experts investigating claim that it looked to be the work of a professional hit performed by two shooters. Rich was alive when authorities found him on the scene, and EMTs expected that he would pull through. He mysteriously died, however, a few hours later.  Nothing to see here people! Move along! Eyes front. Just keep moving!

Why would a 27 year old rising star in the DNC be the target of a professional assassination? We don’t exactly know but I have a feeling that DNC insiders prefer it stay that way.

Seth Rich was the Director of the DNC’s Voter Expansion Data and had just been offered a job with Hillary Clinton’s presidential campaign. His job was to develop a computer application to help voters locate polling locations. More importantly Seth Rich had access to DNC emails – lots and LOTS of emails! Evidence points to the idea that Seth Rich was secretly a Bernie Sanders supporter and disgruntled with the DNC’s collusion with the Clinton campaign

The word “email” has become quite taboo with liberals.  It was those pesky emails that, they believe, cost Hillary Clinton the election to Donald Trump. Emails. Emails. Emails. Delete. Delete. Delete.  The founder of Wikileaks, Julian Assange, claims that Seth Rich had become a disgruntled employee of the DNC and insinuated that it was Rich (not Russia) who was the source of some 44,000 emails and 17,000 attachments that were leaked to Wikileaks.  Julian Assange has never been wrong in 12 years. Not one single time!

Remember when it came to light that the DNC was wrongfully working to make sure Hillary was the democratic candidate over Bernie Sanders?  Yeah…that was from one of those pesky leaked emails. That particular email cost Debbie Wasserman Schultz her job as the head of the DNC since it was demonstrated that they showed bias toward Clinton over Sanders. Funny how cheating does that. Don’t worry though, Debbie got a job with the Clinton campaign (the supermodel gigs were all taken) and unfortunately, Seth Rich got two bullets in the back. Is the death of Seth Rich connected to the leaked DNC emails? Like I said, we just don’t know do we? Hmmmmm.

The reason we don’t know is because no one is investigating it. There are no leads according to authorities. Apparently there are more suspects in the OJ Simpson case than in the Seth Rich murder. The Rich family’s investigator, Rod Wheeler, states that anonymous sources within the Maryland Police Department told him that they were commanded to back off of the investigation. Don’t you love it when that happens?

The news media has been largely silent. Sean Hannity, backed off of his public investigation of the murder at the request of the Rich family. Hannity was widely criticized for promoting a fantastical conspiracy theory on par with Lyndon Johnson conspiring to assassinated JFK. See http://www.nationalreview.com/article/447903/sean-hannity-seth-rich-conspiracy-theory-disgrace. John Podesta, chairman of the Clinton campaign, obviously wants all the speculation to go away. Liberal news writers claim that the botched robbery narrative of the murder should be left to stand as truth since there is a grieving family that should be respected. Meanwhile, CNN and the popular media pundits have continued their investigations and accusations that it was actually Russia working in collusion with the Trump campaign that was responsible for the email leaks and not Rich at all. Russia. Russia. Russia.

Forget the fact that absolutely ZERO evidence of Russian collusion or leaks has been produced. Podesta, and the left could EASILY refute the idea that Seth Rich was the leaker if they would release their computers to the FBI or Department of Homeland Security for examination.  However, they won’t do it.  This is a fact that President Trump reminded the world of on Twitter this past week at the G20 summit. https://twitter.com/realDonaldTrump/status/883229270943911936 And this is why he tweets folks. If the media would produce logic and truth maybe he wouldn’t have to.

Interestingly enough, Rich’s death wasn’t the only one that could be connected to the email leaks. Supporters of Bernie Sanders filed suit against the DNC for their collusion with Clinton’s campaign and claim to have receive death threats. Their process server, Shawn Lucas, was to be a witness in the trial yet was found dead of what was determined an “accidental overdose” from the combination of three different pain-killers. Yeah that sounds logical. I suppose it was also accidental when federal prosecutor Beranton Whisenant, who was investigating Debbie Wasserman Schultz, washed up on the beach in her Florida district.  Ah liberals…don’t they just kill ya?

In my opinion it’s interesting that so little is said as to why the emails existed in the first place. Why were the emails written by the DNC in a country that should have a fair and constitutional election process? So much for free speech.  Sometimes it costs people their lives.

While we may never know the truth about the murder of Seth Rich that happened one year ago today we can point out certain things that are obvious. First, corporate media has no interest in uncovering the truth of a story that could destroy their conspiratorial witch hunt of Trump and Russia ties. They would be forced to recant six months worth of reporting and be held responsible for fostering a narrative that has cost American tax-payers millions. Second, the democrats rigged their election. Plain and simple. Information regarding the depths to which they went to accomplish that is something they are willing to protect at all costs. Third, there is no evidence of of collusion between the Trump campaign and Russia.  Someone else leaked the emails.  Get it through your head.  And finally, while we may not be homicide detectives, forensic scientists, attorneys or even Washington insiders, it remains obvious that whatever truly happened to Seth Rich is being covered up.

Until we effectively challenge and take down the deep state that exists in this country to create false narratives and hide truth we will not be able to return to a sense of democracy.  Face it, the propaganda peddlers are alive and well and spinning their version of the truth at every turn. By pursuing the actual truth on issues such as Russia, the DNC, and the death of Seth Rich we put their power at risk. How badly do you want your country back?