One Guy Ate The $120,000 Banana “Art,” Another Guy Replaced It With Epstein Meme 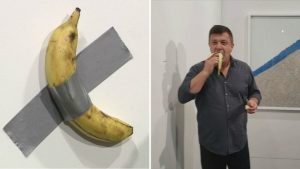 The general public watched, aghast, as a banana duct-taped to the wall sold for $120,000 (which could buy an awful lot of bananas for starving children, I’d assume) at an art show.

Now, another “artist” (since we’re just throwing that term at anyone these days) has done the world an incredible service by ripping the banana off the wall, peeling it, and eating it like God intended.

David Datuna, a performance artist, stunned attendees at the 2019 Art Basel fair in Miami Beach when he ate the infamous banana over the weekend.

The banana itself was the “artwork” of Maurizio Cattelan, the nimrod behind the solid-gold toilet which he titled “America”.

For his work, titled “The Comedian,” Cattelan has been lauded for pointing out the obvious fact: that modern art is stupid. Expensive, but stupid.

“I respect (him) because he makes fun of everything, this is why I respect him,” Datuna said of Cattelan. “He’s smart, he’s genius.”

“What Cattelan did was genius and what I did was also interesting, right?” Datuna added.

As for any sort of reparations, Cattelan isn’t worried about it.

Miami Beach police spokesman Ernesto Rodriguez said Saturday the department had no interactions with Datuna, and the gallery spokeswoman said there had been no complaints about the performance artist.

She said the artwork comes with “instructions” that “the banana should be replaced as necessary.”

Gallery spokesman Lucien Terras told the Miami Herald that Datuna’s snacking would have no impact on the piece’s value because the banana was meant to be replaced as needed.

“He did not destroy the art work,” he told the newspaper. “The banana is the idea.”

According to The Blaze’s Giancarlo Sopo, the blank space where “The Comedian” was once affixed was vandalized with a misspelled version of the “Epstein Didn’t Kill Himself” meme:

Unlike Datuno, however, the vandal who scrawled “EPSTIEN DIDNT KILL HIMSELF” with red lipstick wound up in handcuffs.

Roderick Webber, 46, was arrested on charges of criminal mischief after security guards called police to the scene just before 5 p.m. on Sunday, Miami Beach Police spokesman Ernesto Rodriguez told Newsweek. “This is the gallery where anyone can do art, right?” Webber said after being confronted by a security guard, according to the Herald.

According to the police report, Webber’s hands were covered in “red” and he admitted to writing on the wall of the exhibit. “If someone can eat the $120,000 banana and not get arrested, why can’t I write on the wall?” Webber yelled as he was escorted out of the convention center, the police report said. Webber was taken to the police station without incident, it added.

Webber told Newsweek that he also goes by “Epsteindidntkillhimself Webber” and is “fairly well known in certain circles” for his performance art. “As long as David Datuna pre-arranges a publicity stunt, he is described as an artist,” Webber said.

“Anyone not belonging to their club is evidently a vandal,” Webber said. “Furthermore, I had a discussion with one of the gallerists who said she wouldn’t press charges because, (as I pointed out), Datuna has established precedent.”

Still, Webber said he was charged and spent the night in jail.

“Memes demand nonsense,” Webber said of his misspelling of Epstein’s name. “Art is no longer art—art is memes. Stupid can only be fought with more stupid. In a world where the idea of a banana is worth $120,000, it is our moral obligation to mock, ridicule and crank the stupid up to a thousand.”