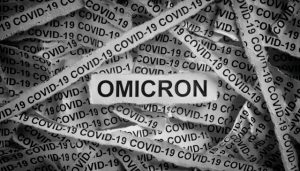 According to new reports, the Omicron variant of the coronavirus has claimed its first victim in the United Kingdom, Prime Minister Boris Johnson stated on Monday, going to issue a warning that the new variant now accounts for 40 percent of infections in the British capital.

Well, it seems the fearmongers are once again gearing up for a big campaign to force everyone to get their 3rd, 4th, 5th, etc., boosters. Guess the top dogs over at Pfizer want a fat Christmas bonus this year. Or maybe a new yacht.

Since the first Omicron cases were detected on Nov. 27 in the United Kingdom, Johnson has imposed tougher restrictions and on Sunday he urged people to get booster shots to prevent the health service from being overwhelmed.

Visiting a vaccination center in London, Johnson congratulated those getting shots and handed out stickers before telling reporters that a patient had died from Omicron which he said could overcome those inoculated with two shots.

“Sadly at least one patient has now been confirmed to have died with Omicron,” Johnson went on to say.

“So I think the idea that this is somehow a milder version of the virus – I think that’s something we need to set on one side – and just recognize the sheer pace at which it accelerates through the population,” he added.

When asked repeatedly whether or not he could rule out the use of tougher restrictions in England before the Christmas holiday, Johnson put on his tap shoes and danced all around the question.

The prime minister stated that there was a spike of Omicron cases breaking out in London, with Health Secretary Sajid Javid saying that the variant was now spreading at a “phenomenal rate.”

Johnson, who is grappling with a rebellion in his party over measures to curb Omicron and an outcry over parties at his Downing Street office during last year’s lockdowns, said people should rush to get booster vaccines to protect “our freedoms and our way of life.”

“After COVID-19 was first detected in China in late 2019, he faced criticism for initially resisting lockdown,” the report said, adding, “He has also been criticized for overseeing mistakes in transferring patients into care homes, and for building a costly test-and-trace system that failed to stop a deadly second wave.”

Johnson has repeatedly said that while mistakes were made, the government was making decisions swiftly in the biggest public health crisis for generations and that his government was quick to roll out vaccines.

As of this report, there have been 146,00 people who have died from the coronavirus in the United Kingdom.