OMG! (VIDEO) Carjacker gets his pants snatched off mid-robbery! You won’t believe this video 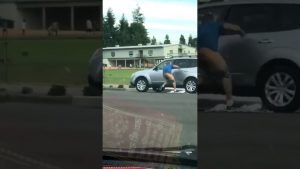 This is why your mother always told you to wear clean underwear…and to not steal cars!

DailyWire.com tells us a Kent, Washington, man may be looking for a new line of work after his miserable attempt at hijacking an SUV was caught on film and is quickly going viral.

The incident happened last Wednesday around 7 p.m. after police say the man had already tried to steal a parked car in a driveway; the man punched the driver but ran away after the driver fought back.

The carjacker’s next attempt would make him internet infamous.

In the clip (below), a silver SUV emerges into frame as the woman filming is shocked to see a man hanging onto the driver’s side door-handle while being dragged down the road with his pants being torn off.

At one point the vehicle comes to a stop and the half-naked carjacker stands and begins opening the door in hopes of completing his robbery, but thankfully the driver hits the gas with the man left once again clutching the door handle, acquiring some much-deserved road rash.

According to KIRO7, when the car stopped again after the video ends, the theif tried to steal a taxi but it was too late because the police were on the scene.

Eyewitnesses say police used a Taser on him several times to get him to give up. Police report the suspect also punched other cars, and he was trying to break door handles to get inside vehicles. He was taken to the hospital for treatment after his arrest. Kent Police Department confirms to KIRO 7 News that the man was taken into custody.

The carjacker’s name hasn’t been released yet as the case is still under investigation.