Oh, Awesome. Jim Carrey Has a New Crazy Painting. Can You Guess the Subject? 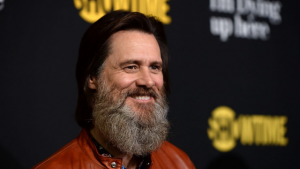 In another amazing feat of “proving leftists are as unhinged as ever”, Jim Carrey has added to his collection of weird, quasi-talented anti-Trump paintings with a portrait of Kavanaugh.

While Carrey himself was granted due process to determine whether or not he was responsible for the wrongful death of his ex-girlfriend, Cathriona White, he doesn’t seem to think Brett Kavanaugh is entitled to his Sixth Amendment rights and has labeled him–and painted him, quite literally as–a rapist.

Here’s his painting of Kavanaugh, accompanied with the obligatory incoherent Twitter rantings:

Colleges care more about donors than the victims of on-campus rape. That's why women don't report it and why ENTITLED LITTLE SHITS like Injustice Kavanaugh get to party and pillage their way to the Supreme Court.I'd like to suggest a new uniform for the highest court in the land. pic.twitter.com/9piWob4jGh

“Colleges care more about donors than the victims of on-campus rape,” he writes. “That’s why women don’t report it and why ENTITLED LITTLE SH*TS like Injustice Kavanaugh get to party and pillage their way to the Supreme Court.I’d like to suggest a new uniform for the highest court in the land.”

Ok…remember when y’all were upset that Betsy DeVoss did away with college kangaroo courts that were convicting students of rape without evidence?

Can’t have it both ways, Jim.

The Daily Wire points out that this brazen statement is quite contrary to Carrey’s recent claim while speaking to Bill Maher that he won’t judge someone just because they vote differently.

“We’ve got to get back to a place where we realize that a vote is not who you are. Because you voted Republican doesn’t mean you’re stupid” he said. “I could break bread with anybody who voted for Trump. We could find some common ground and a reason to love each other.”

Right, unless you’re a judge who was appointed by a Republican, then you’re automatically a rapist the second a woman throws an unsubstantiated last-minute accusation at you right before November midterms.