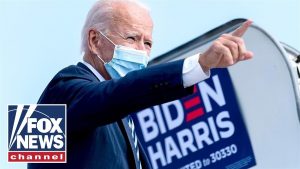 Senior officials are split into two different camps after the Biden administration’s rollout of the Centers for Disease Control and Prevention’s latest guidance concerning mask wearing, with those who agree with the new action as the situation evolves, versus those who are worried that it will ultimately undermine vaccines.

Two officials noted the administration remains concerned about the rise of the delta variant and breakthrough infections but added those same studies prove the “vaccines work.”

“Even when you do have breakthrough infections, less than 1% are resulting in hospitalizations or severe cases, and the mortality rate is effectively zero,” one official went on to say. “Maybe focus on that instead of trying to write the worst possible headline.”

A third official added vaccine confusion sparked by the past week’s coverage will make it harder to convince the remaining sizable portion of the public who have not yet been vaccinated to get the shot.

“The longer it takes these populations to get vaccinated, the greater the chance the virus could mutate into a new strain the vaccines can’t protect against,” that person then said. “All the progress we’ve made could end up down the drain. We’d be right back in 2020.”

Another official within the Biden administration has gone on to suggest that the GOP could ultimately use the mixed messaging coming from the president as ammunition for campaigns in the 2022 midterm elections. Some Republicans have already begun to do just that by drawing attention to a study that was cited by the CDC when it made its determination.

“These guidelines, like most of the Biden Administration’s actions these days, make little sense and seem without scientific direction,” Rubio then said in a statement. “Americans have spent the last year and a half making tremendous sacrifices to halt the virus’s spread, but they are confused and have lost trust in our institutions. The mixed messaging could also degrade trust in the efficacy of vaccines. My bill would bring more transparency to the CDC’s decisions, and direct GAO to offer recommendations on ways the CDC needs to improve their decision making process and the way they communicate recommendations.”

Rep. Jason Smith, a Republican from Missouri, along with 20 other members of the GOP sent a letter to CDC Director Rochelle Walensky last Friday making the claim that the new mask guidance undermines the messaging concerning vaccinations as an effective means of mitigating the spread of the coronavirus.

“We are aware many states are currently experiencing a significant increase in COVID-19 infections because of the transmissibility of the Delta variant. As Members of Congress, we are concerned by this case increase and support state led efforts to increase vaccinations and mitigate the spread. However, at this time we believe more stringent mask guidance will be ineffective and discourage vaccine uptake,” the letter goes on to say, according to a copy that was published by the Washington Examiner. “Your most recent guidance has been issued despite definitive scientific evidence showing the vaccine is effective in preventing the spread of COVID-19, and for those breakthrough cases that do occur, hospitalization and death are almost completely prevented. In fact, the study used by the CDC was rejected in peer review and was based off data from a vaccine that is not approved in the United States.”

“In other words, the decision was based off zero scientific evidence showing transmission among individuals who have received a U.S. approved vaccine,” the letter adds. “Your agency’s arbitrary reversal of mask guidance for vaccinated individuals will result in further vaccine hesitancy because it falsely implies the available COVID-19 vaccines are not effective.”

At the end of the day, it’s becoming clear that a growing number of Americans are growing weary of the faulty science behind wearing masks and how vaccines aren’t seeming to stop the spread of the virus after all.

If you want folks to get vaccinated, then the vaccine needs to be seen as effective. Putting mask mandates back in place does the opposite of that. But the left is so desperate to hold on to power it seems they could care less about the optics of making masks a thing again.