Official Results From Ireland’s Historic Abortion Vote Are In, And It Doesn’t Look Good 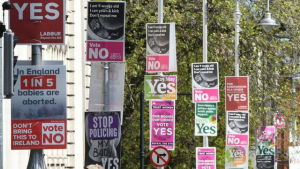 Well, it looks like the pro-“choice” zealots in Ireland have won, and this nation, which once stood as a beacon of hope for pro-life activists across the Western world, will soon be legally ending the lives of unborn Irish citizens.

Ireland has voted by a landslide to liberalize some of the world’s most restrictive abortion laws in what its prime minister described as the culmination of a “quiet revolution” in what was one of Europe’s most socially conservative countries.

Voters in the once deeply Catholic nation were estimated to have backed the change by more than two-to-one, according to two exit polls released on Friday evening, and the government plans to bring in legislation by the end of the year.

Apparently, to “look after women” this obstetrician has been seriously limited by not being able to kill women’s babies.

The vote to “liberalize some of the world’s most restrictive abortion laws” was a vote to repeal the Eighth Amendment to the Constitution of Ireland, which reads: The State acknowledges the right to life of the unborn and, with due regard to the equal right to life of the mother, guarantees in its laws to respect, and, as far as practicable, by its laws to defend and vindicate that right.

If you reduce this historic vote down to brass tacks, the Irish just literally voted to dehumanize and deny the rights of the unborn.

“What Irish voters did yesterday is a tragedy of historic proportions,” the Irish pro-life group Save The 8th said. “However, a wrong does not become a right simply because a majority support it.”

And that is the bottom line here. While our Constitution guarantees the inherent right to life for all Americans, we do not have an amendment specifying the right to life of the unborn, and our Supreme Court tragically and very poorly interpreted the Constitution in 1973 as one that does not guarantee this right.

Ireland was, for twenty-five years, a country that admirably recognized this right, but due to an increasingly pro-death culture that masks the cruelty of abortion with valiant claims of “women’s health” and “women’s rights”, that right will no longer be recognized.

But the right to life, in the US, Ireland, and every single country on earth, is still a right, whether a government chooses to recognize it or not.

Because it is a divine right, endowed by a Creator who crafted us and knew us in our mother’s wombs–and those who take this right away will have to answer to Him someday.