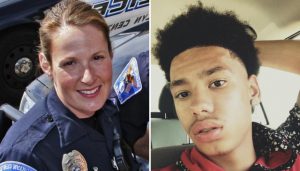 Reports coming out of Brooklyn Center in Minnesota where a black man was shot and killed over the weekend that the officer involved in the incident has resigned from her job, along with Police Chief Tim Gannon.

The Minnesota Department of Public Safety Bureau of Criminal Apprehension released Officer Kim Potter’s identity one day after she was placed on “standard administrative leave” for an accidental discharge of her weapon that killed Wright.

“I have loved every minute of being a police officer and serving this community to the best of my ability, but I believe it is in the best interest of the community, the department, and my fellow officers if I resign immediately,” Potter wrote, according to the St. Paul Pioneer Press.

Her letter was addressed to Elliot, Acting City Manager Reggie Edwards, and Gannon.

Chances are pretty high Potter was going to be fired anyway, so this is probably a good move. While it seems as if what happened was a total accident, this kind of situation is bad all the way around. The victim, Daunte Wright should have obeyed the authorities and not tried to run. And Potter should have made sure she had the correct weapon drawn before firing.