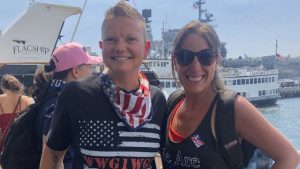 The Department of Justice has announced on Wednesday they will not be pursuing charges against the U.S. Capitol Police officer who shot and killed 35-year-old Air Force veteran and hardcore Trump supporter Ashli Babbitt during the now infamous Capitol riot on January 6.

They cite “insufficient evidence” as the reason they are not going after criminal charges against the officer.

Last week, Dr. Francisco Diaz, the chief medical examiner for the District of Columbia, determined that Babbitt’s death was caused by a “gunshot wound to the left anterior shoulder,” and her manner of death was ruled a “homicide.” Not all homicides are determined to be unjustified or to be murders. A video shows Babbitt attempting to climb through a window into the Speaker’s Lobby during the storming of the Capitol, when she was shot and killed by a yet-unidentified police officer.

The announcement about no charges being filed against the officer who killed Babbitt came the same day that it was revealed that Kimberly Potter, the officer who shot and killed 20-year-old Daunte Wright on Sunday, would be charged with second-degree manslaughter.

The Washington, D.C., medical examiner’s office also said last week that “the cause and manner of death for Capitol Police Officer Brian Sicknick are pending” three months after he died. The Capitol Police announced Sicknick, a 42-year-old who joined the agency in 2008, died on Jan. 7, one day after rioters broke into the Capitol as lawmakers counted electoral votes to affirm now-President Joe Biden‘s victory over former President Donald Trump.

We all know that had this officer shot a black person, rioting and looting would explode on the streets and the government would feel obligated to ensure that the shooter was arrested and charged just to appease the rabid leftists in our society.