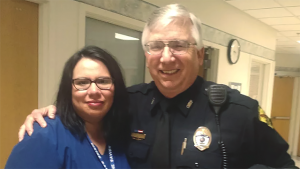 We live in a day and age when it’s cool and hip to hate on anyone in a position of authority who dares to enforce rules and regulations, demanding that we have absolute autonomy to do all that our hearts desire.

Yet, when someone decides to go YOLO — this is a phrase the young “with it” crowd slings around meaning “you only live once” — and actually does whatever they want (which usually entails some sort of illegal activity) the first thing cop haters tends to do is call the police, the very ones in authority that get slandered, protested against, and viciously attacked.

Groups like Black Lives Matter and various other hardcore left-wing groups have made it their life’s mission to bash police and disrespect them at every possible turn.

Thankfully, not everyone in our modern day society is like that.

Take Vanessa Guerra, a nurse, who recently got in a good old fashioned throw down with a suspect who punched a police officer.

Officer Brian Lowenhagen and Sgt. Eric Walters of the Portage Police were attempting to arrest a young fellow who had violated his parole when things took a violent turn.

As Lowenhagen was attempting to handcuff the male suspect, a woman who was with him began punching him in the face. Walters rushed in to offer assistance but was bludgeoned by a kick to the head by the male suspect.

Police Chief Kenneth Manthey said, “The kick was so powerful that it literally knocked Walters out. He was unconscious for over two minutes.”

That’s when nurse Vanessa Guerra, who was off-duty, decided enough was enough, having witnessed the assault carried out by the suspects. Guerra ran to check on the unconscious officer when she heard the female suspect shout about having a knife.

Guerra immediately became concerned that the woman was going to stab Officer Lowenhagen, so she set aside her own personal safety and, according to the police department, “took it upon herself to engage the female suspect by body slamming her against a wall.”

Guerra successfully restrained the woman until Officer Walters was able to regain consciousness.

“When I heard the word ‘knife,’ at that point I thought: ‘It’s going to be you or me,” said Guerra. “At that point it was her.”

Olivia J. Boomsma and Jacob R. Hellenbrand are facing charges of battery to a law enforcement officer and resisting arrest, which are felonies.