Of All People, AOC Shouldn’t Be Poking At Ivanka Trump’s Job Qualifications 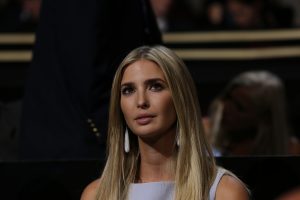 It seems it’s perfectly acceptable to lob pitchforks at women and assume they must have landed their positions in life for reasons other than their accomplishments, you know, as long as the woman targeted is a Republican.

Apparently, the biggest piece of news to come out of last weekend’s G20 summit was the fact that Ivanka Trump was present and found herself included in a handful of photographs alongside other world leaders in attendance.

Not any progress made, deals discussed, or revelations that the leaders of developed countries are all reptilian alien overlords (if you’re into that kind of thing). Nope, our Trump Derangement Syndrome demands that we be ever on the lookout for the mistakes our president makes so we can shout them from the mountaintops of social media.

In a critique that has already aged poorly, Rep. Alexandria Ocasio-Cortez complained that the president’s daughter attending G20 “hurts our diplomatic standing,” and that mere virtue of being a Trump kid does not qualify Ivanka to sit at the grown-up table:

It may be shocking to some, but being someone’s daughter actually isn’t a career qualification.

It hurts our diplomatic standing when the President phones it in & the world moves on.

The US needs our President working the G20. Bringing a qualified diplomat couldn’t hurt either. https://t.co/KCZMXJ8FD9

Now, if you actually watch the video clip AOC and her fellow TDS-suffering squawkers are complaining about, let me know what the problem is. Because all I see is Ivanka standing with a group of world leaders, making a statement, and that’s it.

I’m really, honestly, truly not seeing the problem here. But, then, I’m only smarter than a bag of hammers by a negligible margin.

Now, for sure, if Ivanka had been the sort of person to rest on her daddy’s laurels and never actually achieve anything (which certainly does happen), this would be a valid criticism.

Of course, that’s not the case with Ivanka.

Fox News set the record straight for Ms. Ocasio-Cortez, explaining that prior to joining the administration, Ivanka Trump served as executive vice president with the Trump Organization, as well as CEO of her own clothing and accessories empire.

It doesn’t hurt to be the daughter of a bajillionaire, but something tells me Ivanka wouldn’t have had the success she has if she’d never put, you know, some effort into it.

Ivanka wasn’t merely seen and not heard at the G20 summit either, Fox News added, noting that she “represented the U.S. in meetings with leaders from China, Japan, Russia, India and Australia,” and also “led the U.S. delegation in a special discussion on women’s economic empowerment.”

Before leaving for the trip, Ivanka herself noted that the United States was the only country sending an all-female team to G20:

The United States is the only country in the G20 with an entirely female negotiating team representing President Trump and advancing his priorities.

So, with that in mind, enjoy this selection of folks who let AOC have it on the issue of “job qualifications”:

Could be worse… Ivanka could have been a bar-tender 18 months ago. https://t.co/xAj8Guc3hH

Remind us how being a bartender qualified you to be a member of Congress creating laws, voting on bills that impact Americans & the world.

Let’s not go there & start comparing your resume to @IvankaTrump’s experience & resume.

She also takes no salary. Way to support women… https://t.co/xM8PBkfyIF

I didn't realize being a bar tender was a qualification to be a member of Congress? https://t.co/cWC9zrgXdb

It's OK, you see, for women to undermine other women *if they are Republicans*. https://t.co/0LKokEd0nG

Well, if anyone would know about getting a job with lack of qualifications… https://t.co/VV9ZiPfP09

Modern day feminism: tearing down an accomplished woman because she doesn't hold your ideological views.

But, ya know, she's not a bartender so what the hell does Ivanka know anyway? https://t.co/H4WPqlyiCR

A woman who was a bartender degrades a woman who had a thriving career prior to joining Office of Economic Initiatives.

How many jobs did AOC initiate? Zero. #Amazon https://t.co/EGJJrTgKJf

Actually, since AOC’s moves cost New York some jobs, I might put that last figure in the negatives. Zero is generous.