Ocasio-Cortez’s GOP Challenger Delivers Epic Slam. Here’s What She Had To Say 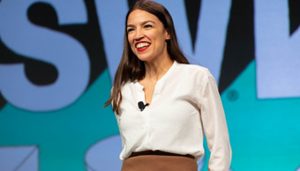 On Thursday evening, a member of the GOP who has plans to challenge Democratic socialist Rep. Alexandria Ocasio-Cortez for her congressional seat in 2020 decided to come out swinging for the fences, delivering an epic slam that will most certainly leave AOC fuming.

So what did this individual say exactly? He called her “all-out crazy” and said she wants to transform America into the Soviet Union.

AOC's Republican challenger calls her All Out Crazy. Producer for ⁦@marklevinshow⁩ speaks better Spanish than she does, and fears neither garbage disposals nor doorbells. ⁦@RichValdes⁩ for Congress! https://t.co/NuOAQBvEvi

Rich Valdes, who currently works as a producer for The Mark Levin Show and formerly was an aide to New Jersey Governor Chris Christie, pulled no punches as he spoke at Queens Village Republican Club, stating, “AOC – All Out Crazy – wants to establish a new Soviet Republic. I believe in capitalism over socialism. Her misguided policies don’t represent the district. She’s great at fundraising but not at constituent services. Ask around, most constituents don’t think climate change is a number one issue.”

As the New York Post reported, Valdes lives in New Jersey, but plans to move to the district Ocasio-Cortez represents. He joked that he was a “carpetbagger,” saying, “People see me and they say ‘Wow, we see you more than we see her! That’s interesting for a carpetbagger.’” Then he added, “ I know I speak better Spanish than her.”

According to a website for Valdes’ exploratory committee, Valdes worked in the New Jersey Office of Family & Community Partnerships in 2011; in 2017 Christie appointed Valdes to serve as an advisor to the State’s Center for Hispanic Policy Research & Development. Prior to that he worked with Somerset Christian College president Dr. David E. Schroeder, who stated:

Although Rich Valdes has been Admissions Director for Somerset Christian College for less than a year, he has demonstrated the qualities and work performance that I expect, which is a high level of excellence. Most remarkably, Rich has turned a stagnant culture of low energy and achievement into a highly motivated and successful team.

Valdes has a lot going for him, having been appointed by Newark Mayor Corey Booker, Police Director Jerry McCarthy, and Clergy Affairs Commander Sergeant Lesley L. Jones, Jr. to be the Deputy Chief, Police Chaplain for the City of Newark. He has also done extensive work with families of violent crime victims.

That doesn’t mean the fight will be easy. It’s most definitely going to be an uphill battle, seeing as how AOC’s district is chock full of liberals who no doubt still see the young lady as the future of the Democratic Party, completely undeterred by the complete lack of common sense and incompetence she’s exhibited during her time in office.

Everyone across the country should most definitely be pulling for Valdes here because the last thing we need is another term for Ocasio-Cortez. Her ideas are dangerous and the less she’s around to muck things up, the better.