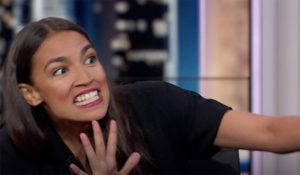 Wow, she really figured it out!

All these months of being asked how she plans to pay for her trillion-dollar social services program, socialist darling Alexandria Ocasio-Cortez has found the silver bullet that will destroy all the greedy fat cat Republicans casting shade on her massively expensive spending plan.

You just pay it!

Conservative tweeter (is that a thing? I say it’s a thing) James Woods shared Ocasio-Cortez’s brilliant new campaign in the form of a warning for future generations recently, and the short video clip that serves as said warning tells you everything you need to know about the congressional candidate:

This should be in a time capsule for future generations to study. https://t.co/k8w3T0dbJq

“People often say: ‘how are you gonna pay for it?’ and I find the question so puzzling because how do you pay for something that’s more affordable?” Ocasio-Cortez says of how the government ought to pay for her healthcare-for-all plan. “How do you pay for cheaper rent? You just pay for it.”

“It’s not that we’re saying that this whole system is free. It is free of cost at the point of service,” she adds.

This girl is going places.

None of them involve sound economic policy, but she’s definitely going…somewhere (sadly, likely Congress, where, when it comes to realistic spending programs, let’s be real, she’ll fit right in.)

Her plan for education is just about as sound:

Pay professors the same as a K-12 teacher?

That totally makes sense, girl! You nailed it.

And that, my friends…is why friends don’t let friends vote for socialists.