Ocasio-Cortez Dons Designer Clothes to Pose With the Working Class, Still Doesn’t Know How to Pay for $40 Trillion Agenda 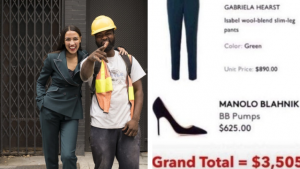 When it comes to being a socialist, Ocasio-Cortez is no fraud.

In fact, the young Democratic Socialist who has captured the eyes of the nation and the hearts of economically-illiterate millennials hasn’t even been elected yet and she’s already got socialism down.

She’s not afraid to dream big–$40+ trillion dollars big–for how our money ought to be spent and our government to go into further crippling debt, and she’s clearly already perfectly comfortable with spending plenty on herself, too.

Shaking down the public for their hard-earned money and crippling the economy while living a lavish lifestyle?

In a photo shoot for Interview magazine, Ocasio-Cortez was pictured wearing a $3,500 outfit as she posed with construction workers.​ She was decked out in a Gabriela Hearst blazer ($1,990), Gabriela Hearst pants ($890), and some Monolo Blahnik shoes ($625).

She donned this outfit in a photoshoot which included poses alongside working class construction workers, because I don’t know about you, but I always wear Blahnik’s when I am trying to show the working class I can identify with them.

Imagine how many pairs of work boots, nurses’ scrubs, or sets of factory safety gear you could buy for $3,500? Or heck, just the price of the shoes?! 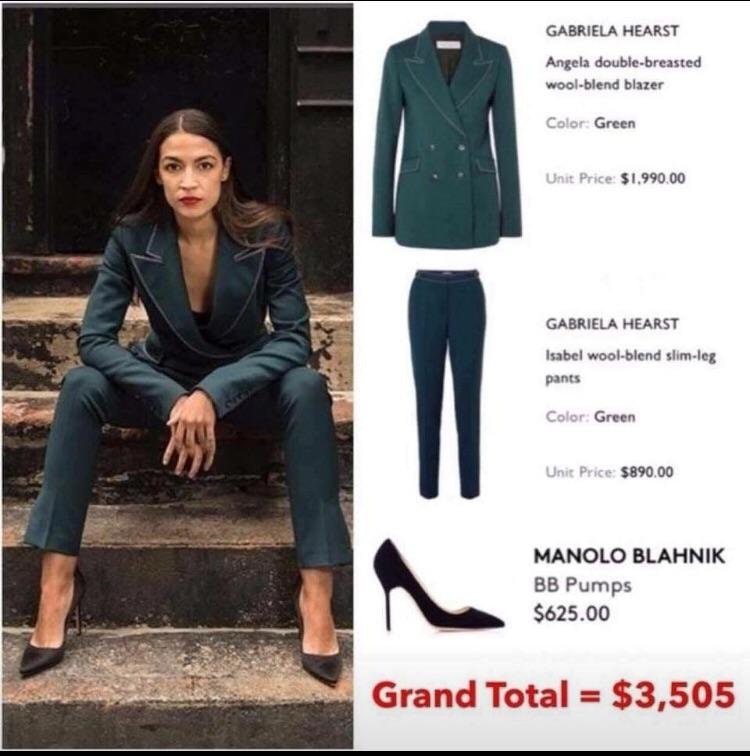 The image detailing Ocasio-Cortez’s expensive taste was submitted to a pro-Trump board on Reddit, where users were more than happy to weigh in on what a bad look this posh look was for AOC,  Daily Wire reports:

“I’ve never met a socialist who had the faintest idea of redistributing a penny of their own money. They’re all about taking all the time,” said one Redittor.

“As a barmaid she took all $500 of the tips after a holiday night at the bar, stiffing the waitresses with only $50,” said another. “She is only a socialist if she can take as much as she wants and leave the scraps for everyone else.”

Said yet another: “No, she’s a real socialist. This is what socialism is. You tell the people that they deserve more, and those stinky ‘rich’ people aren’t paying their fair share. Then you join the ranks of the elite, bu[y] expensive clothes, lake houses, Audis, etc., and you’re set. This is socialism. This is literally what it is.”

If this is socialism, she nailed it.

Meanwhile, when asked over the weekend how she would pay for her insanely costly spending program, she responded…predictably:

On Sunday, Ocasio-Cortez appeared on the CNN morning show “State of the Union,” where host Jake Tapper asked her how she’d pay for all her costly programs — especially when her proposed tax increases would bring in just $2 trillion in new revenue.

Her answer included this gem: “… When you look at the economic activity that it spurs — for example, if you look at my generation, millennials, the amount of economic activity that we do not engage in. The fact that we delay purchasing homes, that we don’t participate in the economy as purchasing cars as fully as fully as possible is a cost. It is an externality, if you will, of unprecedented amount of student loan debt.”