Ocasio-Cortez Compares Invitation for Debate to Catcalling. This Is Everything Wrong With the American Left. 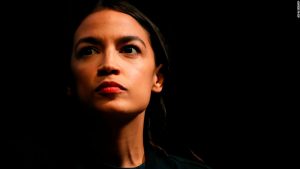 Alexandria Ocasio-Cortez, a winner of a Democratic Congressional primary in New York, listens to a speaker at a fundraiser Thursday, Aug. 2, 2018, in Los Angeles. (AP Photo/Jae C. Hong)

When the mainstream media decided to catapult 28-year-old Alexandria Ocasio-Cortez to the spotlight, they got everything that goes along with trying to make a bartender-turned Congressional candidate who doesn’t understand geopolitics or her own party’s platform the “face of the Democratic party.”

A lot of Democrats aren’t thrilled with Ocasio-Cortez, who hasn’t even been elected to Congress yet, most likely because she can’t even politic and she is showing them all up.

So when Ben Shapiro, the incessant thorn in the side of anyone relying on logical fallacies and fact-deficient rhetoric to bolster their worldview, genuinely invited Ocasio-Cortez to a debate (after he and “Conservative Millenial” Allie Stuckey had a little fun with the fake interviews Ocasio-Cortez thought were real. Don’t ask.), the socialist star once again reminded everyone how inexperienced and immature she was.

By comparing Shapiro’s invitation to “catcalling.”

Just like catcalling, I don’t owe a response to unsolicited requests from men with bad intentions.

And also like catcalling, for some reason they feel entitled to one. pic.twitter.com/rsD17Oq9qe

In classic Shapiro form, he proceeded to completely wreck the unprepared Ocasio-Cortez for having literally nothing better to say to an invitation for an honest, fair debate or discussion on his show (which, by the way, he had offered to do in exchange for a $10,000 donation to her campaign.)

Discussion and debate are not “bad intentions.” Slandering someone as a sexist catcaller without reason or evidence does demonstrate cowardice and bad intent, however. https://t.co/kYaYuf0W43

But sure, go with “the Orthodox Jew who has never catcalled a woman in his life is ACKSHUALLY a sexist catcaller for asking for a discussion or debate.” I’m sure your media sycophants will eat it up.

It is so insulting to strong, educated, empowered women everywhere to compare a respectful invitation to an open debate to catcalling. Does she want to be taken seriously, or doesn’t she?

But she’s a progressive. So if the options are, intellectually defend your political beliefs or play the victim card…she’s always going to go with the victim card.