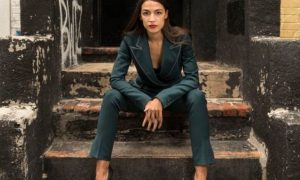 Like any good socialist, Alexandria Ocasio-Cortez has already mastered passing herself off as a working-class hero while secretly being anything but.

Of course, while her comfortable childhood, designer clothing, and sensible savings plan aren’t too difficult to uncover, her followers are likely to follow her regardless, because, well, they’re socialists.

Socialists aren’t big on data or facts, they just like the warm fuzzy feeling it gives them to demand other people’s money be used for free everything.

Ocasio-Cortez knows this of course, and she knew it when she lamented to the New York Times last week that, until her (whopping $174,000-a-year) Senate salary kicks in in January, she is unable to afford an apartment in Washington DC.

Fox News apparently considered this statement rather interesting, and so they did some digging.

Turns out, she probably has plenty of cash put aside to pay for an apartment herself, that is, if she’s not planning on squatting in Nancy Pelosi’s office until her first term starts.

Movements should care about elections, because we can elect people who will fight with our movements.

Right now, @Ocasio2018 is sitting in @NancyPelosi’s office with a huge crowd of young folks demanding a #GreenNewDeal & the just climate solutions we need.

She reported having between $15,001 and $50,000 in her checking account as of the end of April 2018, according to a Financial Disclosure Report she submitted to the clerk of the U.S. House of Representatives.

The financial disclosure also reveals that she has an investment account valued between $1,001 and $15,000.

This puts the socialist Democrat well above most American households, whose median checking account balance is $3,400, according to the latest Federal Reserve survey in 2016. Among Millennials, the median balance is about $1,400.

This also means that for her not to afford an apartment in Washington, she should have depleted all her savings – as potentially ranging up to $50,000 – in just three months when she wasn’t receiving any income.

We know socialists like to waste money, so although she’s been paying herself out of her campaign (which is legal) since February, it’s actually not entirely unbelievable that she spent it all on designer clothes and avocado toast.

Odds are, though, she’s just playing the part her followers want her to play.

Hip, cool, broke millennial who has to wait two whole months for her healthy Congressional salary.