Ocasio-Cortez Brags About Her Accomplishments on Her Birthday. Here’s What She Left Out. 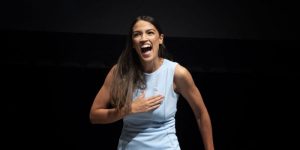 Nothing says selfless public servant like bragging about your accomplishments on your birthday.

Alexandria Ocasio-Cortez, who has quickly become one of the most hilarious things that has happened all year, a gift that just keeps on giving, seems to have taken a page out of Hillary Clinton’s book on how she chose to acknowledge another year gone by on Twitter.

We all remember this gem:

Here are AOC’s birthday wishes to herself, from Saturday:

At 22, I was working w/ children + communities.

At 25, I was waitressing to support my family.

At 28, I won my primary for Congress. I didn’t have health insurance.

You’re never too late, too early, or too imperfect to care for yourself or pursue your dreams.

I’m incredibly grateful + thankful to all the family, friends, and community that has supported this journey.

I’m blessed to have the Bronx and Queens as my home.

Thank you to everyone that has worked to fill our community with love. Looking forward to the future we make. ✨

Hilariously self-serving, of course, and also just as optimistic as dear ol’ Hill.

AOC’s humble brag about how hard-working she is were quickly scrutinized by the kind of people who have been laughing along as long as she’s been in the public eye, and the good folks over at Town Hall decided to flesh out her claims a little bit.

Here’s what she left out:

• When she was five she moved from the Bronox to Yorktown Heights, where the average household income is $141,254.

• She attended Boston University, a private college where tuition alone currently sits at $52,816 (and no, that doesn’t include room and board, books, fees, etc).

• While in college she interned for U.S. Senator Ted Kennedy and handled foreign affairs and immigration casework for his constituents.

• She campaigned for Bernie Sanders in 2016.

• After the 2016 election she drove across the country to talk to people in Flint, Michigan about the water crisis there and to the Dakota Access Pipeline protests to talk with protestors.

• She worked for the National Hispanic Institute, a nonprofit organization that fights for the civil rights of hispanics, as the Educational Director of the 2017 Northeast Collegiate World Series.

Does this sound like the average 29-year-old, working-class Queens resident to you?

Not really. Sounds more like a privileged millennial who was given far more opportunities and had many more advantages than the vast majority of her Queens constituents, but she’s still trying to pass herself off as one of them.

She hasn’t overcome very much adversity in her life, and it’s an insult to the people she tries to identify with to suggest she is.

But while she may not be very impoverished or disadvantaged, all these false pretenses certainly make her an authentic socialist. She’ll be in good company with the likes of Bernie Sanders and Elizabeth Warren, the vastly wealthy Congressional progressives who sit comfortably in the 1% while calling for other people to fork over their hard-earned.

Watch–she’ll have a lucrative book deal in no time.