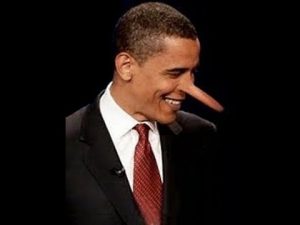 Barak Obama, who you may remember from lying is a$$ off to our faces for approximately eight years, just told a crowd of supporters in Nevada that he doesn’t lie, which was, as you may have guessed, a big fat lie.

Let’s take a little stroll through all the lies Obama has told, shall we?

“If you like your health care plan, you can keep it.”

First, in a statement that earned him “Lie of the Year” from Politifact, Obama told likely his most famous whopper, which we have all learned the hard way was patently false.

“So this fall, as cancellation letters were going out to approximately 4 million Americans, the public realized Obama’s breezy assurances were wrong. Boiling down the complicated health care law to a soundbite proved treacherous, even for its promoter-in-chief. Obama and his team made matters worse, suggesting they had been misunderstood all along,” Politifact explained.

“I had a scandal-free administration.”

Obama is fond of bragging about his scandal-free administration, illustrating either a absolutely terrible memory or further demonstration of his penchant for lying.

“He conveniently forgot the IRS scandal, the Benghazi scandal, the Fast and Furious Scandal, letting Hezbollah funnel cocaine into the United States, and secretly wiretapping AP reporters,” the Daily Wire reminds us.

“The day after it happened, I acknowledged that [Benghazi] was an act of terrorism.”

While Obama did call it an “act of terror”, he refused to call it terrorism.

Here’s what he told CBS the day after:

Kroft: “Mr. President, this morning you went out of your way to avoid the use of the word ‘terrorism’ in connection with the Libya attack.”

Kroft: “Do you believe that this was a terrorist attack?”

Obama: “Well, it’s too early to know exactly how this came about, what group was involved, but obviously it was an attack on Americans. And we are going to be working with the Libyan government to make sure that we bring these folks to justice, one way or the other.”

Eight days later, he was asked at a Univision town hall: “We have reports that the White House said today that the attacks in Libya were a terrorist attack. Do you have information indicating that it was Iran, or al-Qaeda was behind organizing the protests?”

He replied, “Well, we’re still doing an investigation, and there are going to be different circumstances in different countries. And so I don’t want to speak to something until we have all the information. What we do know is that the natural protests that arose because of the outrage over the video were used as an excuse by extremists to see if they can also directly harm U.S. interests.”