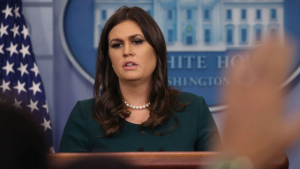 President Trump followed through on one of his major campaign promises this week by pulling out of the Obama administration’s foreign policy baby, the Iran Deal.

You know, the deal where we sent pallets of cash to the world’s biggest state sponsor of anti-Western terrorism in exchange for a pinky swear promise that they’d stop their nuke program for a few years?

Anyway, Democrats who are still struggling to recover from the shock of Hillary’s loss in 2016 have been tearing their hair out, because apparently, it’s much more tactful to give fundamentalist Islamic states gobs of money and several months of warning before inspecting their weapons facilities to check for nukes than it is to tell them to quit it or we’ll show them some nukes.

That’s just kind of how Democrats like to roll, I guess.

Hillary, still under the impression that anyone gives two hoots what she thinks about anything at all ever, declared that America’s “credibility is shot”, while her State Department sucessor John Kerry, recently busted for conducting his own vigilante diplomacy with Iran after leaving office, says pulling out of the deal “weakens our security, breaks America’s word.”

Obama, ever the orator, gave a lengthy statement…on Facebook (2018, yo). Now that his foreign policy legacy has been destroyed, he’s obviously intent on going down in history as the first former POTUS to break the tradition as staying the heck out of the way once he’s left office.

Thanks for your input there, Barry.

Sarah Huckabee Sanders, who has little tolerance for nonesence, however, obliterated the relevance of these three grandstanders with one simple and glorious statement:

“I think based on each of those individuals’ lack of success in this entire process on foreign affairs,” she retorted, “they would probably be the last three people that we would look to for advice and counsel, and whether or not we had made the right decisions.”