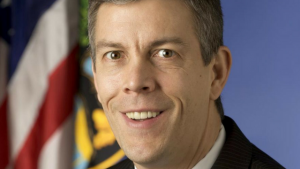 The Obama administration is not marked by a particular degree of productivity, so it’s no surprise that his education secretary doesn’t seem to know how school shootings work. Or how schools work. Or how anything at all works.

Arme Duncan proposed his idea on Twitter on Friday, following the news of the tragic Santa Fe, Texas shooting.

So what is this brilliant idea?

Why, a nationwide boycott, of course!! A boycott of what, precisely, you say?

This is brilliant, and tragically necessary.
What if no children went to school until gun laws changed to keep them safe?
My family is all in if we can do this at scale.
Parents, will you please join us? https://t.co/Yo4wsFuJI5

According to the Daily Wire, he doubled down on his suggestion to the Washington Post over the weekend.

There’s one caveat, of course: he wants other parents and kids to go first. Because of course, he does.

The Daily Wire notes that, consistent with his legacy at the Department of Education, Duncan is clearly not thinking this through.

“Duncan is most famous, perhaps, for taking a wholly incorrect approach to Chicago’s failing schools, and running the system far further into debt,” they explain. “But as a dedicated member of the Chicago progressive community, it seems Duncan is also wildly detached from his own city. How would lower income Chicago families — whose children are more likely to be victims of violence — keep kids out of school without giving up their jobs? Duncan may be able to afford child care, but most parents wouldn’t. And most kids can’t afford to be kept out of school for the length of time it might take to pass any sort of comprehensive legislation.”

Not to mention, what would this achieve? The Nation Teacher’s Union is already one of the most powerful lobbies in the country, and they secure contracts so ironclad they’d be unlikely to be negatively affected by a “school boycott”. Would the kids be so fed up with missing school they’d turn into a national army of David Hoggs and Emma Gonzalezs? Unlikely.

Oh, I know! The plan is to raise up a generation so poorly educated, they aren’t taught about the philosophical roots of our nation and gladly give up their rights without question? Is that it? Because I think that’s it.