Oakland Kneeler Arrested. His skills as a kneeler will come in handy in jail 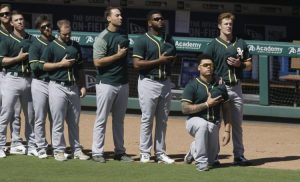 Towards the end of the Major League Baseball season, Bruce Maxwell, a catcher for the Oakland Athletics, became the only MLB player to kneel in protest during the playing of the National Anthem.

It seems that when a female food delivery driver arrived at Maxwell’s home, he pointed a gun at her, scaring her to no end. Maxwell claimed that on recent visit to his home in Alabama, he was refused service at a restaurant because of his on-field protest, but the waiter involved in the incident told the media that he doesn’t even know who Bruce Maxwell is.

Consequently, Maxwell has been charged with aggravated assault with a deadly weapon and disorderly conduct. The assault charge is a class two felony in Arizona, which could result in anywhere from 36 months to 150 months (3 years to 12 years 6 months) in prison, if found guilty. (From Great American Politics)

The Blaze reports that Maxwell was arrested at 6:08 p.m. MST in Scottsdale, Arizona, at his home.

He probably won’t be Oakland’s starting catcher in 2018 as recent reports suggested. Most likely he’ll be in prison catching something else.