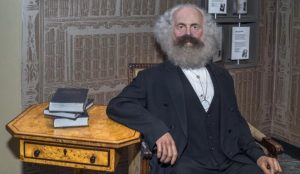 It never ceases to amuse me how much more popular Marxism is among affluent Middle-class liberal college students than it is among the actual working class.

There, of course, have been many periods of history in many countries in the world in which this was most certainly not the case, but in 21st Century America, it is impossible to deny that socialism is mostly all the rage among indoctrinated college students swayed with romantic notions of “power to the people” by past-their-prime baby boomer professors trying to relive the glory days as they enjoy their comfortable salaries and a general life of ease, or the debt-laden millennials who never learned to adult who think that the real injustice in the world is not being able to get a job with a degree in comparative gender ideology among endangered species.

The altogether bogie appeal of Marxism was on full display at an October birthday party for the late philosopher, who’s 200th birthday was in 2018 apparently.

NYU students and apparently other random people with a comfortable enough life to be able to think up weird interpretative dances gathered to honor the life of a man who spent his days surviving on someone else’s dime while thinking up a philosophy that would be used as the premise for tyrannical dictatorships that murdered millions upon millions of people, destroy the economy of resource-rich nations, and inspire bougie college students and unskilled twenty-somethings for centuries to come.

With a choral rendition of The Communist Manifesto, dance routines that resemble a toddler trying to avoid getting dressed, and the most painfully awkward dance party you’ve ever seen, these students are certainly getting their parents’ $47,000 a year worth.