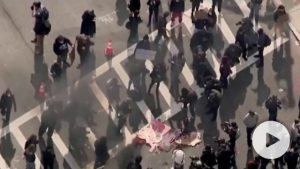 Well, folks, it’s almost Election Day, and since we’ve discovered this year that the radical left’s favorite medium of expression is violence, rioting, and stealing stuff, lots of individuals in New York City who live in luxury buildings have decided they need extra protection.

Many buildings in Manhattan, such as the Time Warner Center located on Columbus Circle — where you can purchase a penthouse for the low, low price of $62.5 million — have hired off-duty law enforcement officers with “submachine guns” to stand guard over things during what’s sure to be an explosive night.

“Everybody is worried about security,” an insider told the media. “Every top building is adding security. It’s out of control. We hope it won’t be needed, but we will be ready.”

The insider went on to reveal that the building is working with both the NYPD and Homeland Security.

“There will be officers with submachine guns,” the source stated. “We’ve always had immense security, but there will be more. We’ll have extra patrols. The entire building can be shut down with one button.”

Many of the buildings are hiring off-duty cops because they are afraid of what could potentially happen if they use private security companies. They don’t want to see a repeat of Denver, where a private security guard ended up shooting and killing a protester.

Other top buildings, such as 220 Central Park South, which is home to hedge funder Ken Griffin’s $238 million condo, say they are already well guarded but will take extra precautions, like keeping entrances locked at night, and only open to residents.

Other billionaire buildings, like 432 Park Avenue, are discussing what extra measures to take this week, a resident board member told the Post.

“Everybody is doing it, adding elevated security to make sure that buildings are safe,” a real estate insider said.

In a letter that went out to residents this week, the building management wrote they have plans in place for an extended period of time “to anticipate and mitigate the possibility of civil unrest and violence following the upcoming presidential election.”

How sad is it that we even need to take these precautions during an election in a supposedly free country? The tyranny we face today does indeed stem somewhat out of a bloated government bureaucracy.

But the biggest threat of tyranny is from the mob mentality of the radical left. We’ve witnessed them murder people for having a different set of values and ideals. Each night on the news we’ve seen them burn down entire neighborhoods.

This ought not be here in the United States. Everyone is free to express themselves and their voices without fear of something horrible happening to them, their families, or their property.