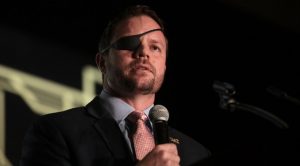 This “writer” really should have thought twice before picking Crenshaw to be the target of nasty verbal assaults like this, because he surely grew to feel embarrassed after getting his backside handed to him.

The Daily Wire is reporting:

In a now-deleted tweet, Ali wrote: “Anytime a Republican says they are ‘patriots’ ask them if they voted to fund the 9/11 Victims Compensation Fund. You know who’s for it? Ilhan Omar. You know who hasn’t sponsored it? Dan Crenshaw. @DanCrenshawTX, I hope you do the right thing. If not, why aren’t you?”

Crenshaw responded by writing: “Hey ‘journalist,’ maybe you should check your facts. I am a co-sponsor. Nice try though.”

Crenshaw, who is a former Navy SEAL, also included a picture of an x-ray scan of his head that showed the injury that he sustained when a bomb blew up in his face while he was fighting terrorists overseas.

Hey “journalist,” maybe you should check your facts. I am a co-sponsor. Nice try though.

It’s appalling to think that these liberal journalists working for crappy progressive publications like the NY Times are actually arrogant enough to insult a former Navy SEAL turned politician and question his patriotism.

Crenshaw has done far more in the service of his country than a failure like Ali will do in an entire lifetime.

Perhaps, if you have nothing good to say, you just shouldn’t say anything?