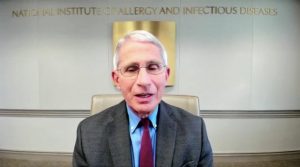 According to a brand new story written and published by the New York Post on Tuesday, Dr. Anthony Fauci has been an “impediment to knowing the true story of COVID-19” and should no longer be advising the country about the current pandemic.

Boy, this guy really is a piece of work, isn’t he? Lies through his teeth almost constantly.

“New reports cast doubt on Fauci’s insistence that no U.S. money went to ‘gain-of-function’ research, by which scientists manipulate viruses, often making them more transmittable, to study their effects and develop treatments, the Post reported,” according to Newsmax.

Fauci testified before Congress in May and insisted that the U.S. “has not ever and does not now fund gain-of-function research in the Wuhan Institute of Virology.”

But records acquired by The Intercept detail grants that the U.S. government’s scientific agencies gave to an outfit called EcoHealth Alliance, which funneled some of that money to research at the Wuhan Institute of Virology in China, the Post said.

“Fauci has been an impediment to knowing the true story of COVID-19. It’s obvious he’s prioritized funding and research over accountability,” the Post Editorial Board went on to say in the piece.

“Congress should call Fauci on the carpet to explain under oath exactly what he knows about EcoHealth and Wuhan. And then, as we’ve said before, he needs to go. He’s undermined the trust needed to successfully fight the pandemic. A vaccinated society needs to move on. And it needs to know the truth,” the report continued.

A clause in the contract between the U.S. government and EcoHealth Alliance said that “prior to altering mutant viruses,” the National Institute of Allergy and Infectious Diseases needed a “detailed description” of the proposed changes. Work on coronaviruses “must be submitted to NIAID for review and approval.”

For the few who probably don’t already know, Fauci is the director of the NIAID.

“Surprise surprise — Fauci lied again. And I was right about his agency funding novel Coronavirus research at Wuhan,” Sen. Rand Paul said in a tweet on Tuesday.

“After the COVID-19 outbreak, EcoHealth President Peter Daszak wanted scientists, including Fauci, to publicly denounce the idea that the virus leaked from the Wuhan lab,” Newsmax reported.

“I have already asked the [Department of Justice] to review Fauci’s testimony for lying to Congress,” Paul said in another tweet published Tuesday afternoon. “This report should make it abundantly clear that he needs to be held accountable.”

Why hasn’t this dude been booted already?