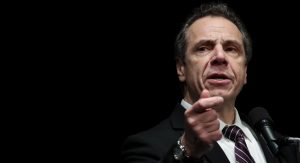 I like how Democrats only seem to remember how contrary to Western values Islamic practices like Sharia or jihad are when they use them to disparage conservatives.

Last week, we reported on a conservative commentator who literally walked off the set when a leftist repeatedly compared constitutional conservatism to “sharia law,” and yet leftist heroes like Linda Sarsour love to talk about the glorious civil rights contained within Sharia, an Islamic legal system that considers women as second-class citizens, makes it illegal to blaspheme Muhammad, and calls for the taxation of Christians and Jews.

Now, New York governor Andrew Cuomo has described Trump’s agenda as “jihad”, an Islamic word which translates to “struggle” that describes what are considered valiant acts of violence in the name of Islam, such as driving through a crowd of infidels in a semi truck or flying to airplanes into a couple of skyscrapers.

Or holding illegal criminal aliens accountable for their actions, apparently.

Cuomo’s comment was made after he announced that he was pardoning criminal illegal aliens who were facing deportation because of their past crimes, the New York Post reported.

“What they’ve done at the border is an example of it, what they’ve done in Puerto Rico, and they are on a jihad to deport as many people as they can who they believe are not in the United States legally,” Cuomo claimed.

The Democrats rarely even use the word of jihad, while Muslim apologists in the US that Democrats are quite chummy with typically explain that jihad does not mean terrorism but rather a personal commitment to spreading the wisdom of Islam.

So, suddenly jihad is a bad thing, Cuomo?