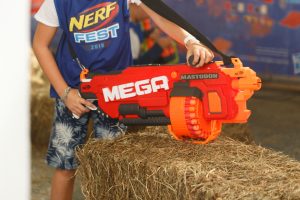 Which of y’all remember playing cowboys and indians? How about chewing those chalky candy cigarettes? Or playing with realistic toy guns before that neon orange cap was made the industry standard?

If a consumer advocacy group based out of this writer’s home city has their way, us older Millennials can soon add Nerf guns to the list of childhood relics banned by the nanny state.

Yes, Nerf guns. The kind that shoot one gram of suction cup-tipped foam at the back of your big brother’s stupid, hair gel-saturated head while he’s watching MTV.

According to the Rochester-based Empire State Consumer Project, these “assault-style” toys have got to go.

In a letter published by Rochester First, the Project begged Nerf manufacturer Hasbro to scrap the classic toys:

As the holidays approach, we are reminded of our mission to protect the safety of children. As we watch holiday toy commercials, we see the Nerf Ultra One and other extreme Nerf machine guns for children and are reminded of mass shootings that have devastated American children and families for decades now. In these times, the TV ad for this product plays like a Saturday Night Live parody, except that it is not at all funny. Toy guns are one thing, but these emblems of mass destruction take them to the next, horrifying level.

Hasbro’s stated mission is “to create the best play and entertainment experiences. The best play and entertainment experiences stand apart from anyone else’s and deliver joy, creativity and connection around the world and across generations.” Also from your website, “Hasbro is committed to making the world a better place for children and their families through corporate social responsibility and philanthropy.”

And this … “At Hasbro, we play with purpose. We are using our business as a force for good and building a safer, more sustainable and inclusive company and world for all.”

Judy Braiman, the Project’s president, needs to stick to what she does best, which using actual evidence to alert consumers to products that are actually dangerous, like toys containing unsafe amounts of lead. Instead, the Project is taking a page out of the social justice playbook and grilling Hasbro on its “corporate values” and apparent participation in America’s supposed gun violence epidemic:

When your products themselves violate most of your proclaimed corporate values, something is very wrong. How does promoting play with huge automatic weapons create joy, creativity and connection around the world, and across generations, and make the world a better place for children? How do these weapon products use your business as a force for good? Who would this child be shooting with his cache of assault weapons? In one of the most creative industries on earth, how does one of the country’s largest toy producers fall so short in coming up with innovative toys that spark the peace-filled imaginations of children? If your research shows that children are craving toy assault weapons, you have missed the mark. Parents will tell you that many are afraid of going to school because of the stories they see and hear when a school shooting occurs. Surely, those of you who are parents understand.

Of course, the Project failed to mention an ounce of evidence demonstrating that these “assault style” toys are legitimately dangerous anywhere outside their own sensitive imaginations.

Marketing assault weapon toys to this most vulnerable group of consumers is an assault on their dignity and their worth as human beings. We implore you to remove assault-style toy weapons from your product offering. Social responsibility asks for a connection between the hearts of board members and the people who generate their profits, in this case, the children. Be responsible to these children; be leaders on this issue…your shareholders will thank you.

In the words of a fellow New Yorker with whom I shared this story, “IT’S A NERF GUN!! YA BUNCH OF MORONS!!”

In all seriousness, this mentality is why New York is the nanny state cesspit it is. This is the sort of reptile-brain thinking that got us the “SAFE” Act, a law that banned all high-capacity weapons and magazines except for 7-round-or less products which did not even exist at the time. Seriously. Governor Andrew Cuomo expected New York gun owners to continue using their 10-round magazines but only load 7 rounds at a time.

I wish I was making this up, truly I do. But, sadly, this is not satire. This is New York.

Speaking of New York lawmakers, PJ Media’s Megan Fox brings up the unsettling point that, should state legislators get wind of this garbage, it’s sure to become law. We all know how much they love legislating their citizens into complete submission.