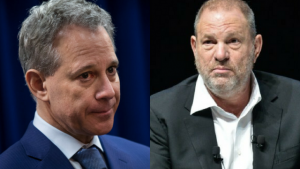 A vocal supporter of the #MeToo movement and a darling of the Democratic party, who was set to bring charges against Harvey Weinstein for his plethora of sexual abuse allegations, has himself resigned after allegations of heinous sexual abuse were published by the same journalist who took down the now disgrace Hollywood producer.

The irony is far, far too rich to handle.

New York Attorney General Eric Schneiderman announced his immediate resignation Tuesday after a New Yorker story published by journalist Ronan Farrow exposed the testimony of two women who claim to have experienced disgusting abuse at the hand of Schneiderman.

“While these allegations are unrelated to my professional conduct or the operations of the office, they will effectively prevent me from leading the office’s work at this critical time,” Schneiderman said in a statement a mere three hours after publication of the expose. “I therefore resign my office, effective at the close of business on May 8, 2018.”

The New Yorker story details that “As New York State’s highest-ranking law-enforcement officer, Schneiderman, who is sixty-three, has used his authority to take legal action against the disgraced film mogul Harvey Weinstein, and to demand greater compensation for the victims of Weinstein’s alleged sexual crimes. Last month, when the Times and this magazine were awarded a joint Pulitzer Prize for coverage of sexual harassment, Schneiderman issued a congratulatory tweet, praising “the brave women and men who spoke up about the sexual harassment they had endured at the hands of powerful men.” Without these women, he noted, ‘there would not be the critical national reckoning under way.'”

“Now,” the article continues, “Schneiderman is facing a reckoning of his own. As his prominence as a voice against sexual misconduct has risen, so, too, has the distress of four women with whom he has had romantic relationships or encounters. They accuse Schneiderman of having subjected them to nonconsensual physical violence.”

“They allege that he repeatedly hit them, often after drinking, frequently in bed and never with their consent. Manning Barish and Selvaratnam categorize the abuse he inflicted on them as “assault.” They did not report their allegations to the police at the time, but both say that they eventually sought medical attention after having been slapped hard across the ear and face, and also choked. Selvaratnam says that Schneiderman warned her he could have her followed and her phones tapped, and both say that he threatened to kill them if they broke up with him.”

These two women, as one can imagine, were encouraged to see more women speak out about sexual abuse they’d suffered before they decided to speak out themselves, but, “as Schneiderman used the authority of his office to assume a major role in the #MeToo movement, their anger and anguish grew.”

Maybe Schneiderman can get a cell next to his buddy Weinstein, if anyone decides to finally prosecute these two dirt bags.