The “NUTS” Are Falling on Our Heads! 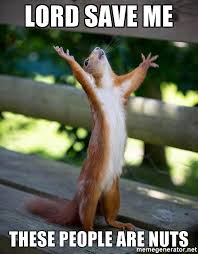 In his first book in the Chronicles of Narnia series, C.S. Lewis has one of his creatures that is suffering from the grip of forever winter from the witch who rules Narnia, bemoaning their situation, “It is always winter and never Christmas.”

In the deluge of present day “nuttiness”, especially in the Western World, I am beginning to think that it is always “Fall” because the “NUTS” are raining down on us like I have never witnessed before in all my septuagenarian years.

A few case in points:

On the evening of the recent terrorist attack in New York City, Nicholas Kristof of the New York Times is being interviewed by Don Lemon:

So, what happens when these terrorists attack? According to the PC NUTs, we should not rush to judgment on the ideology of the perpetrator, unless he is a white-supremacists. Yet, whenever there is a shooting it’s the gun to blame and we need “common sense gun control”. Now, it appears, is the time for “common sense rental truck control”? Jeez! How Nutty?

Professor Sara Giordano from the University of California argues that science is a form of white power which relies on “a colonial and racialized form of power,” and must be replaced with an “anti-science, antiracist, feminist approach to knowledge production.”

Giordano has vowed to “challenge the authority of Science” by “rewriting knowledge” through a feminist lens.

It is unclear what exactly Giordano means by separating science from truth. Although Giordano has a Ph.D. in Neuroscience from Emory University, she is a NUT.

Dividing “white America” into three segments, Prof. Rickford urged the audience to “forget about” all whites except the “sliver” who “hate capitalism.”

More “NUTS” are falling on our heads from the lecturer podium at the University of Texas  where recently a bisexual student was accused of offending someone because they questioned whether it was a good thing that several Muslim countries have the death penalty for homosexuality. What is so stunning about this is that the student was threatened with the ‘Behaviour Intervention Team’ (i.e. the reorientation center for cracked nuts) and being expelled from his philosophy course because of his ‘Islamophobia.’

The British government has said the term “pregnant woman” should not be used in a UN treaty because it “excludes” transgender people. The government spokesperson added: It’s not women who get pregnant — it’s ‘people.’

Another “NUT” incident from the UK: Thomas & Friends is a British children’s television series, which had its first broadcast on the ITV network on 9 October 1984 and airs on PBS Kids in the US. These books deal with the adventures of a group of locomotives and road vehicles who live on the fictional Island of Sodor. The main player/train is Thomas the Tank Engine

Well, old Thomas the Tank Engine is to be revamped so that it can be more politically correct. There will now be three female engines and four male (why not a transgender engine?). The Fat Controller will be slimmer and nicer….and Ringo Starr has gone!  As the Scotsman reported – “In its evolution the cartoon will tackle and teach kids about quality education, gender equality, sustainable cities and communities, responsible consumption and production, and life on land.”

Felix Ngole, an African social work student at the University of Sheffield was expelled from his course for writing the following on his Facebook page —“the Bible and God identify homosexuality as a sin”, adding that “same-sex marriage is a sin whether we like it or not. It is God’s words and man’s sentiments would not change His words.”

This is a position that I and millions of other Christians hold. However, for holding that position at this juncture in the Western World, we can expect the relentless attempts to have us expelled from any and every arena of the public square. In contrast, one can hold the most perverse views, label anyone who disagrees with political correctness as capitalists, homophobic, racists, pigs. You can think and state publicly that Israel should be wiped out. You are expected to believe that Islam is a religion of peace, and any suggestion that the religion champions terrorism gets you tagged as Islamophobic. You can mock and abuse Christians, but if you dare to question the PC ideology, especially the LBQT+ worldview, then you are susceptible to the “Nut House” for treatment!

Joseph Goebbels, the propaganda minister for Adolf Hitler in Nazi Germany, said, “If you tell a lie big enough and keep repeating it, people will eventually come to believe it. The lie can be maintained only for such time as the State can shield the people from the political, economic and/or military consequences of the lie. It thus becomes vitally important for the State to use all of its powers to repress dissent, for the truth is the mortal enemy of the lie, and thus by extension, the truth is the greatest enemy of the State.”

We must learn to protect our heads by getting the truth or else the politically correct, post-modern propaganda of the falling NUTS will eventually make you “nutty” like them, or have you placed in treatment centers for “cracked nuts” to be “fixed”!