NRA: Don’t Blow Up Your YETI Cooler, Just Put Our Sticker On It 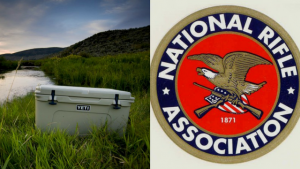 No one likes to waste money, so many owners of YETI brand coolers were pretty ticked off when they found out that the popular outdoor gear brand was suddenly cutting ties with the NRA.

The NRA released a statement last month saying that YETI had, out of the blue, decided to put an end to a longstanding program they had had in partnership with the NRA Foundation.

In a new twist on the “YETI cooler challenge”, some folks, instead of testing the famed extended cooling YETI has been known for, simply shot at or blew up their coolers, making sure to post the videos to social media to let folks knew that they stood with the NRA.

But the NRA wants people to know there’s no need to waste such an expensive cooler, and they’re willing to help members across the country in what is a much simpler, not to mention cheaper, way to express their loyalty to the time-honored gun safety organization.

“The NRA is now suggesting that Yeti owners not destroy their ‘$500’ cooler to send a message. Rather, they suggest you cover the Yeti name with an ‘I Stand with the NRA Foundation’ sticker to make the point,” Breitbart reports.

To help out, the NRA will have 100,000 “I stand with the NRA” stickers at their annual convention in Dallas this weekend, which they’re urging members to just slap on their YETI and avoid the mess and waste of a clickbait detonation video.