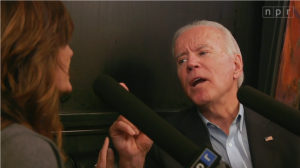 As calls for civility and respectful discourse ramp up among both Democrats and Republicans, Democratic presidential frontrunner Joe Biden would rather cuss voters out and challenge them to push-up contests.

In an interview with NPR’s “Morning Edition,” Rachel Martin had a few questions for Biden about a recent confrontation he had with an 83-year-old man at an Iowa campaign stop:

MARTIN: I want to switch gears and ask you about what happened the other day at your town hall because you got a lot of attention for it. A man stood up and started throwing false allegations your way about your son Hunter Biden and his work in Ukraine and your work as vice president then in Ukraine. And you responded by calling him a “damn liar.”

BIDEN: Because he lied.

Biden laughed it off and claimed that he was joking because the man had called him “too old.”

Then, Martin hurled the ultimate slur at her fellow liberal: she compared him to President  Trump:

MARTIN: Which is what Donald Trump says a lot. “Hey, you can’t take a joke. I was joking.”

MARTIN: But people did. At the town hall I was just at.

MARTIN: Yes they did. They said to me, the woman you met at the end, 94-year-old Mary said to me, “I was so disappointed in him.” This is a direct quote. “That is not the Joe I know. He sounded like Donald Trump in that clip.”

What Trump does is different, Biden whined.

“He makes fun of people. He belittles people. He lies. I don’t do any of those things. Period,” Biden said. “The fact of the matter is this guy stood up, and he was, in fact, lying. And I just pointed out, ‘You’re a liar.’ It’s a fact. He lied. Period.”

Biden did concede, however slightly, that maybe it wasn’t the brightest idea to challenge the octogenarian to a push-up contest. Understatement of the century, right here.

Martin kept up the pressure, however, telling Biden that the “point was, in this time when you talk about needing to restore civility, it’s so important to so many people.”

“That’s not civil? To call someone who lied a liar?” Biden asked.

“To call someone a ‘damn liar’? A voter? This isn’t Trump,” Martin replied.

“But he’s lying! He’s lying,” Biden fired back, reminding this writer of a petulant child. “You acknowledge what he said wasn’t even true. None of the mainstream media believes any of that was true.”

Martin told Biden that “it was the tone,” not necessarily the content, “that was off-putting to people.” Being the classless act he is, Biden simply said, “My mother would say, ‘God love you dear.’”

Say what you will about President Trump’s many brash remarks on the campaign trail, Biden supporters haven’t got a leg to stand on when it comes to the civility of their candidate.

I can’t help but feel that leftist disapproval of Democratic presidential candidate is merely the harbinger of increasing leftist extremism on the party’s horizon.

Still, it’s fun to watch them eat their own.