Not Satire: Students Are Confessing Climate “Sins” To Potted Plants At This Mainstream Seminary 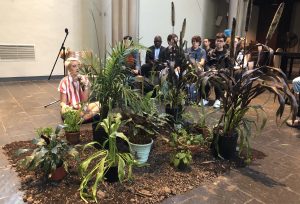 As much as I wish it were, what you are about to read is not from The Babylon Bee. I checked. Students are honestly, truly, seriously confessing their sins to a bunch of potted plants in chapel over at Union Theological Seminary, which lovingly tags itself as the place “where faith and scholarship meet to reimagine the work of justice.”

According to the Washington Examiner, Union became the nation’s first independent seminary back in 1893 when it left the Presbyterian Church after the denomination tried to oust one of its professors for denying that the Bible is inerrant and inspired by God, among other things.

It seems they’ve come a long way since 1893. Well, a long way down into the stinking pit of theological liberalism, that is.

Go ahead and pop a Tylenol or two now, folks. You’re gonna need it.

“Today in chapel, we confessed to plants,” UTS declared Tuesday on Twitter, fully expecting to be taken seriously. “Together, we held our grief, joy, regret, hope, guilt and sorrow in prayer; offering them to the beings who sustain us but whose gift we too often fail to honor. What do you confess to the plants in your life?”

Today in chapel, we confessed to plants. Together, we held our grief, joy, regret, hope, guilt and sorrow in prayer; offering them to the beings who sustain us but whose gift we too often fail to honor.

What do you confess to the plants in your life? pic.twitter.com/tEs3Vm8oU4

Seriously. From the looks of it, these folks pulled every potted plant out of the lobby and brought it over to this pile of dirt (what is even the point of the pile of dirt, anyway?), and began “confessing” to the plant beings.

I stand here before you a shocked, broken writer, unable to give adequate comment on this unmitigated insanity. I have no words for this. Well, none that I can afford to pay the swear jar for.

I think you smoked one of the plants first.

And, my personal favorite:

While I would love nothing more than to end the article right now, believe me, that’s not where this story ends. If you didn’t take that Tylenol when I told you to, now’s the time.

While Union received plenty of sound rebuke for their clear embrace of paganism, they, of course, doubled down on the plant confession exercise in a follow up thread on Wednesday:

We are in the throes of a climate emergency, a crisis created by humanity's arrogance, our disregard for Creation.

Far too often, we see the natural world only as resources to be extracted for our use, not divinely created in their own right—worthy of honor, thanks and care. /2

I understand that not many readers will be familiar with traditions in witchcraft and Wicca, but the similarities in language here are too stunning to ignore. This is literally just Wicca that has been lightly Christianized.

Churches have a huge role to play in this endeavor. Theologies that encourage humans to dominate and master the Earth have played a deplorable role in degrading God's creation.

We must birth new theology, new liturgy to heal and sow, replacing ones that reap and destroy. /4

Something tells me their doctrine of sin is just a mite bit different than oh, I dunno, what the Bible says about it. Just a guess.

And here's the thing: At first, this work will seem weird. It won't feel normal. It won't look like how we're used to worship looking and sounding.

I think it’s pretty obvious why the work seems weird.

So, if you're poking fun, we'd ask only that you also spend a couple moments asking:

Do I treat plants and animals as divinely created beings?

What harm do I cause without thinking?

How can I enter into new relationship with the natural world? /9

Honestly, y’all, that’s all I can bear to report. It only gets worse, and I’m already on the verge of apoplexy here.

So, climate hysteria has invaded supposedly Christian seminaries and caused them to tightly embrace and defend a weird, quasi-Shinto breed of paganism.

After their massive thread defending the practice, Union resorted to simply retweeting examples of confessions from other folks:

Clearly on board. I’ve consulted my plant communion and they’ve vibrated back approval. There’s weird ecopiety; I’m here for it. It’s weird. But we need weird for the planet.

What I can’t stand is the [high] church arrogance in response. Noting churches never to walk into. https://t.co/zabBAPo1vH

Here was my confession:

“I confess that even as I’ve waxed poetic and theological about how indispensable you are, I’ve privileged my own comfort and convenience over your wellbeing” https://t.co/fjjoznZ3aY

Oh my heck, y’all. That’s it, I’m out. Can’t take it. I’ll let the good Dietrich Bonhoeffer, courtesy of the Washington Examiner once more, take it from here:

German pastor and anti-Nazi dissident Dietrich Bonhoeffer was among the school’s more famous alumni, who left after escaping the Third Reich to teach there briefly in 1939. Appalled by the liberalism of its students, Bonhoeffer wrote they “are completely clueless with respect to what dogmatics is really about. They are not familiar with even the most basic questions. They become intoxicated with liberal and humanistic phrases, are amused at the fundamentalists, and yet basically are not even up to their level.”

Bonhoeffer remembered that students “openly [laughed]” at a lecture on sin and forgiveness, and accused the seminary of having “forgotten what Christian theology in its very essence stands for.”