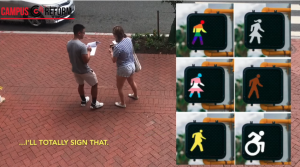 As the most insane manifestations of leftism continue to metastasize in American academia, they’re one of just a few voices of reason doing something about it.

And, as an added bonus, they’re usually hilarious.

In their latest video, Campus Correspondent Ethan Cai takes to the streets at George Washington University (GW) to ask students if they’d be so kind as to sign a fake petition to ban the universally-known white stick figure in crosswalk signals. Ol’ Whitey is “oppressive,” of course, and we want our traffic safety apparatuses to be inclusive.

According to The Daily Wire, Campus Reform chose GW for its petition prank because of its students’ recent vote to “remove and replace” the university’s mascot, George the Colonial, which “is received as extremely offensive not only by students of the University, but the nation and world at large” because it “glorifies the act of systemic oppression,” according to a real petition calling for its removal. The measure was passed in March by a slim majority.

So, armed with a clipboard and pen, Cai made it to GW to see just how concerned these kids are about “offense” and “oppression”.

“As we students cross the street, we are told by the symbol of a white man when it is okay to cross,” Campus Reform’s prank petition reads. “Many students from diverse backgrounds, including individuals of color, gender fluid individuals, and LGBTQA+ individuals, feel oppressed by this.” Students who sign the petition are supposedly letting the university know that they “vehemently urge the University to consider changing the crosswalk signs.”

Many students and even a faculty member were eager to add their John Hancocks to the petition. Some students supported the fake measure because the alternatives to Ol’ Whitey (such as Ol’ Fatty, Ol’ Pridey, Ol’ Lady, Ol’ Tranny, and Ol’ Wheely) were “so cute” and “lit.”

“There’s definitely a lack of representation,” one student said about the crosswalks. Another said that she thought the change would be “one step” to a more welcoming campus environment.

“That’s so cute! Oh my god yeah,” a student said with excitement about the idea. “I can see like, I guess, why some students have a problem with it… I’ll totally sign that.”

Most shown in the video, however, said they could “absolutely” see how someone would be offended by the “white man” telling them what to do and were eager to promote “diversity” with a new stick figure.

Just one lone wolf opposed the fake proposition, saying he was “ideologically opposed” to changing the triggery stick figure.

Watch for yourselves if you dare: